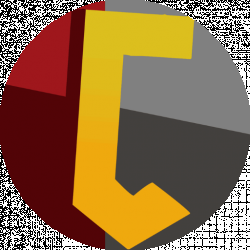 Conan Fanatics Team
We, the Conan Fanatics Team, are a team of the most prominent Conan Exiles streamers, content creators, and games journalists. We are the best of the best when it comes to all things Conan Exiles. We played over 10,000+ hours in this survival gaming Goliath. We have seen within solo campaigns and remain the most revered warrior in the respective online servers. We at Conan Fanatics want to give you all the tools to begin your adventure and thrive in this new, unforgiving world.

“A chunk of stone pulsating with corruption”

What are Corrupted Stones?

How to Get Corrupted Stones?

You might think that because this item is a stone, you might find it lying around the vast open world of Conan Exiles and be able to grab a handful as you come across them.

Sadly, you’re wrong. Corrupted Stones are a craftable ingredient and you will need to learn how to create them, although thankfully, you have come to the right place.

Where to Learn the Corrupted Stones Recipe 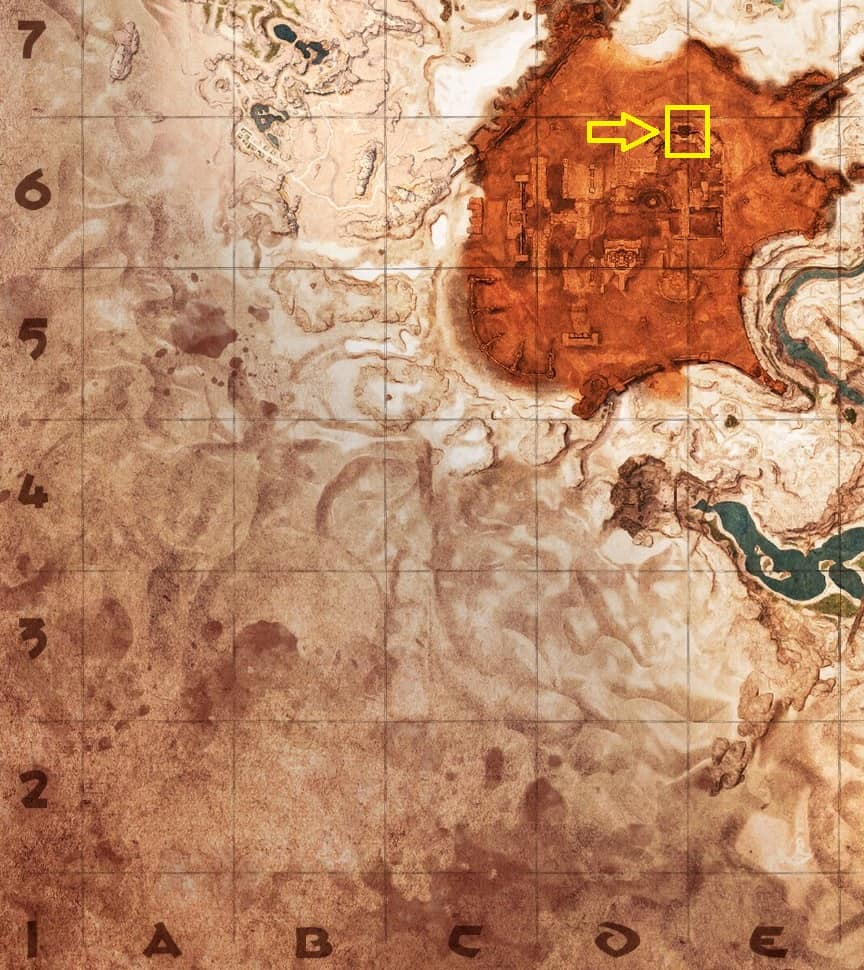 To be able to craft it, you must first pay a visit to The Archivist, located in The Archives, which is a cave in the Unnamed City (map coordinates D-E/6). The Archivist, a ghostly god, may wait for you inside the cave; otherwise, you will find him walking around its opening. 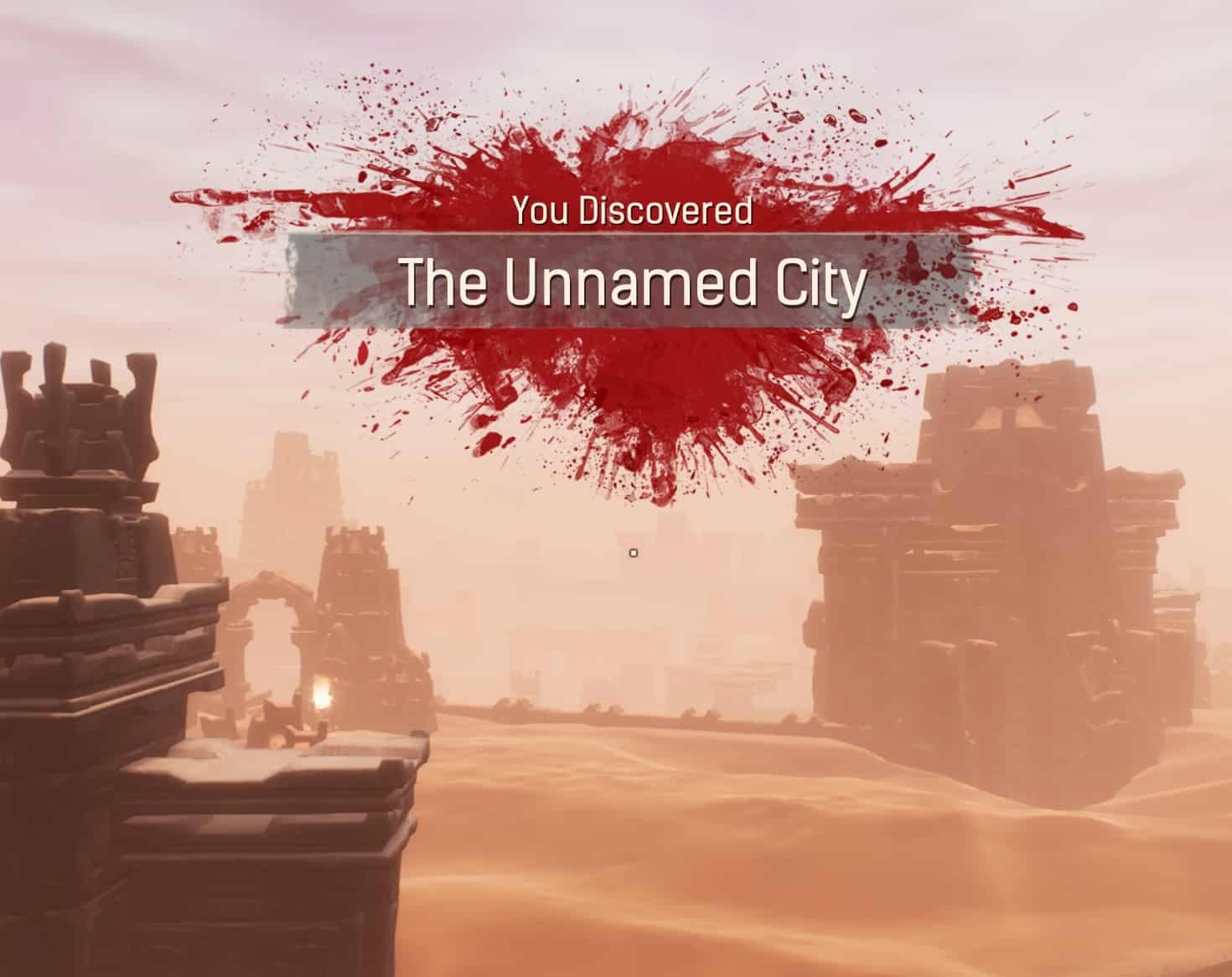 Upon reaching the walls of the Unnamed City, pay attention to bosses who are all over the whole area of The Unnamed City. To be sure to carve out a safe way to your destination. 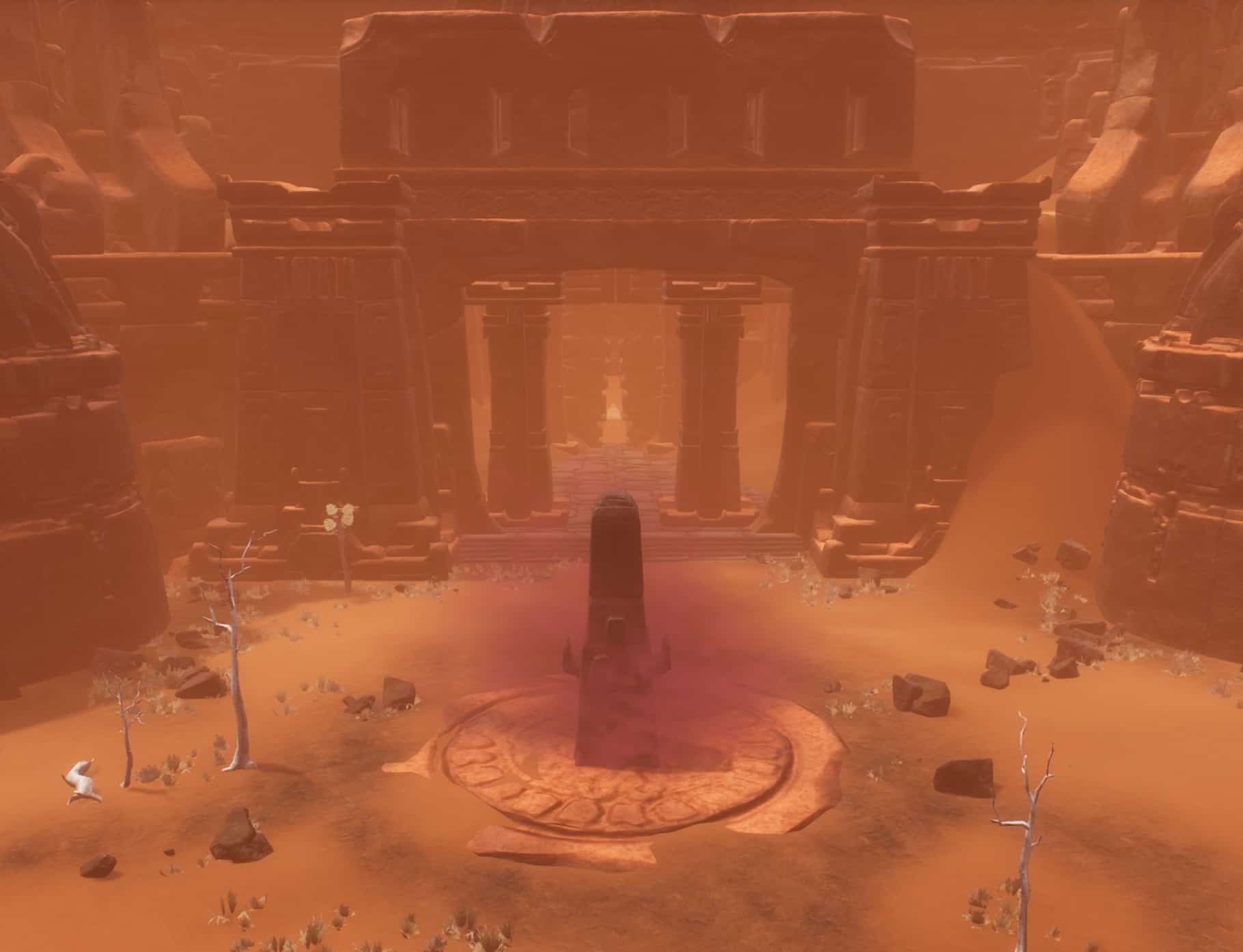 Now just walk to the point of the map D-E/6 and look for the obelisk and entrance of the cave. (Side note: if you have in your clan a Map-Room, or have seen one during your journey, you can also click on the pillar which spawns a yellow light on the Map-Room, the third starting to count on the left, going counter-clockwise, to be immediately teleported to this obelisk shown in the image) 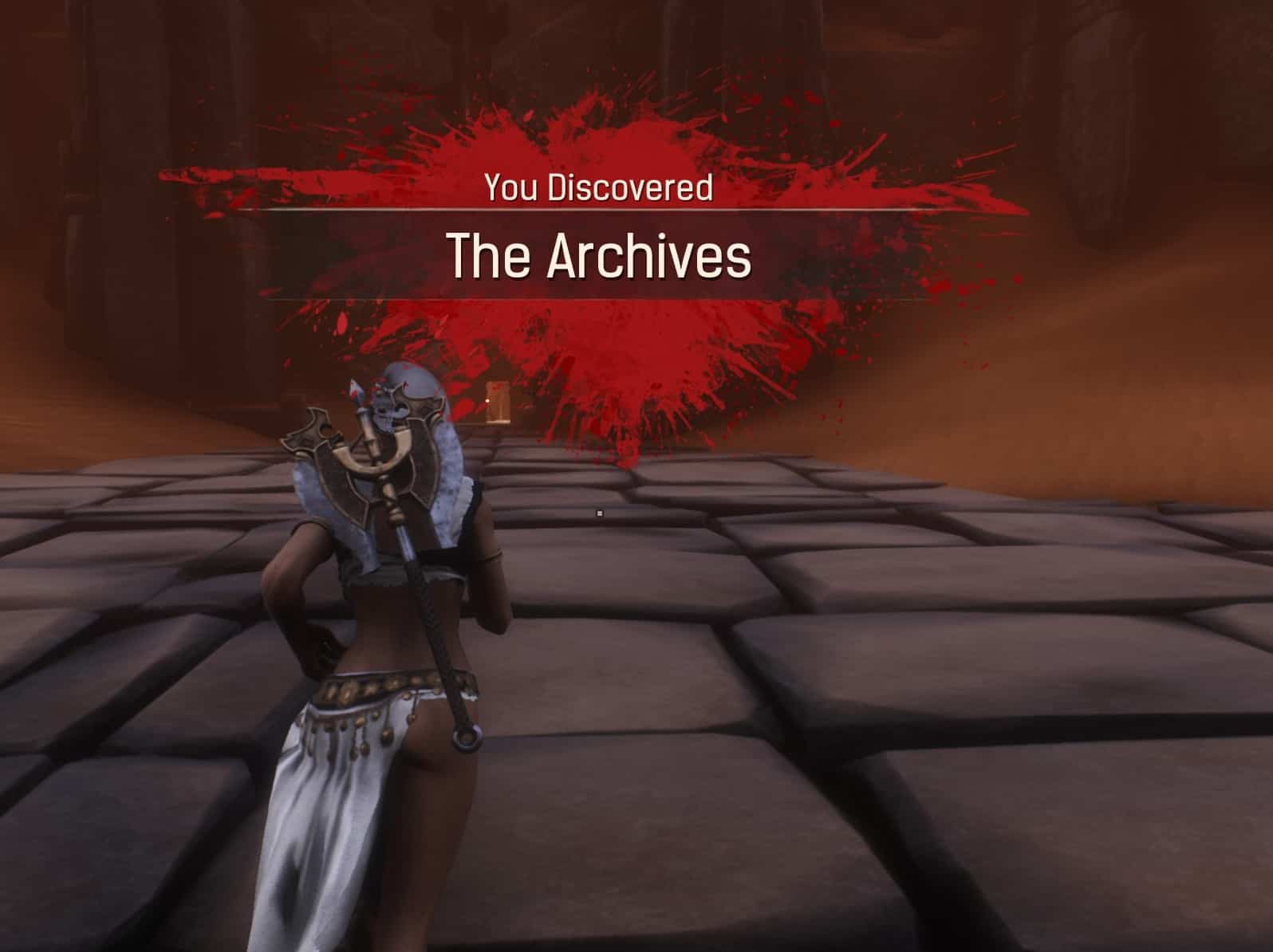 Reaching the entrance, just walk straight forward and eventually, you well get the pop-up on the screen that you have discovered ‘The Archives’. 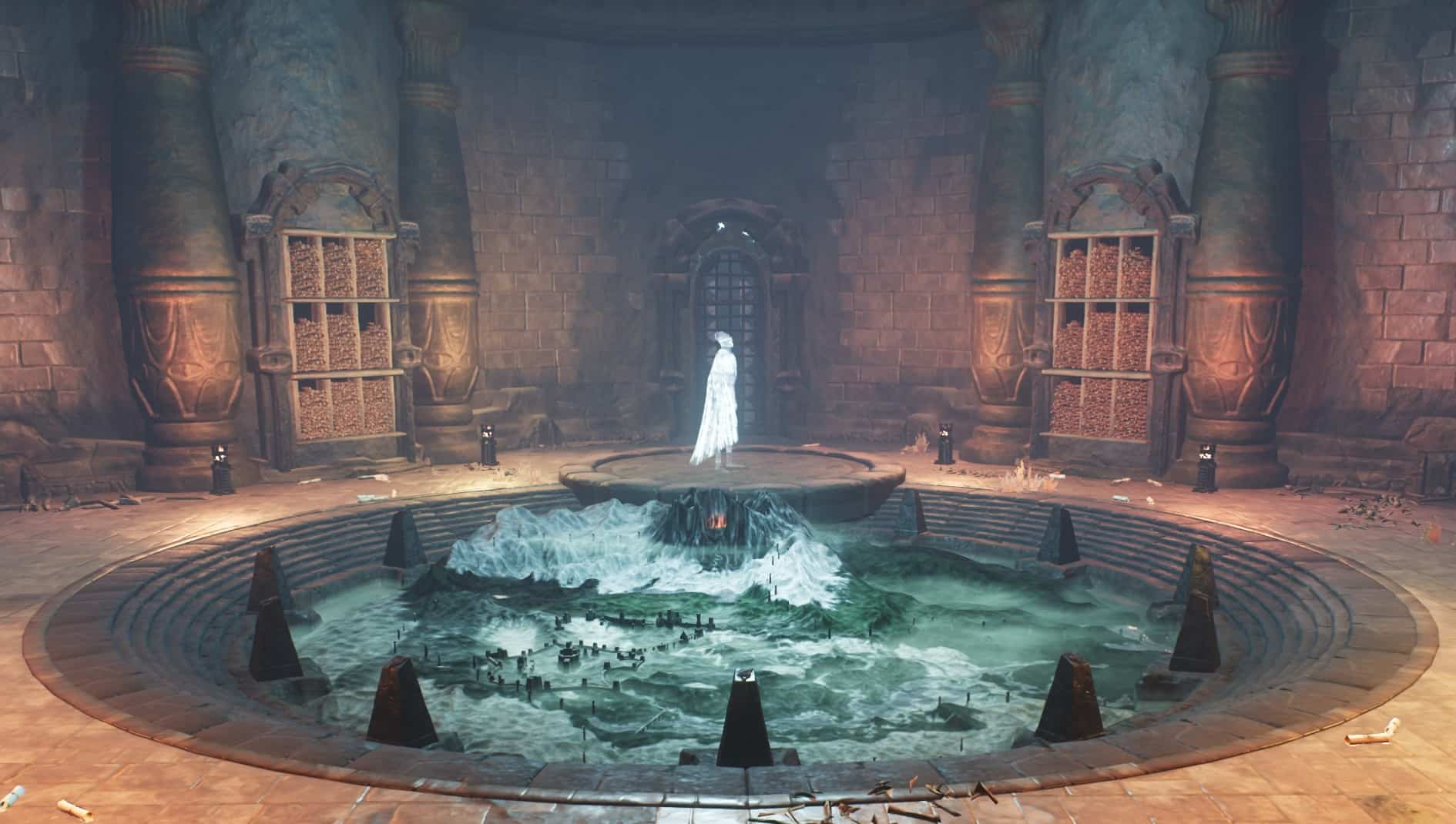 As you enter the big cave, you will find on the floor, the Map-Room, a very helpful resource as it can teleport you to many different locations in The Exiles Land.

Now look at the white ghostly guy at the end of the cave: he’s the one you are looking for. Don’t be afraid, he will not attack you. 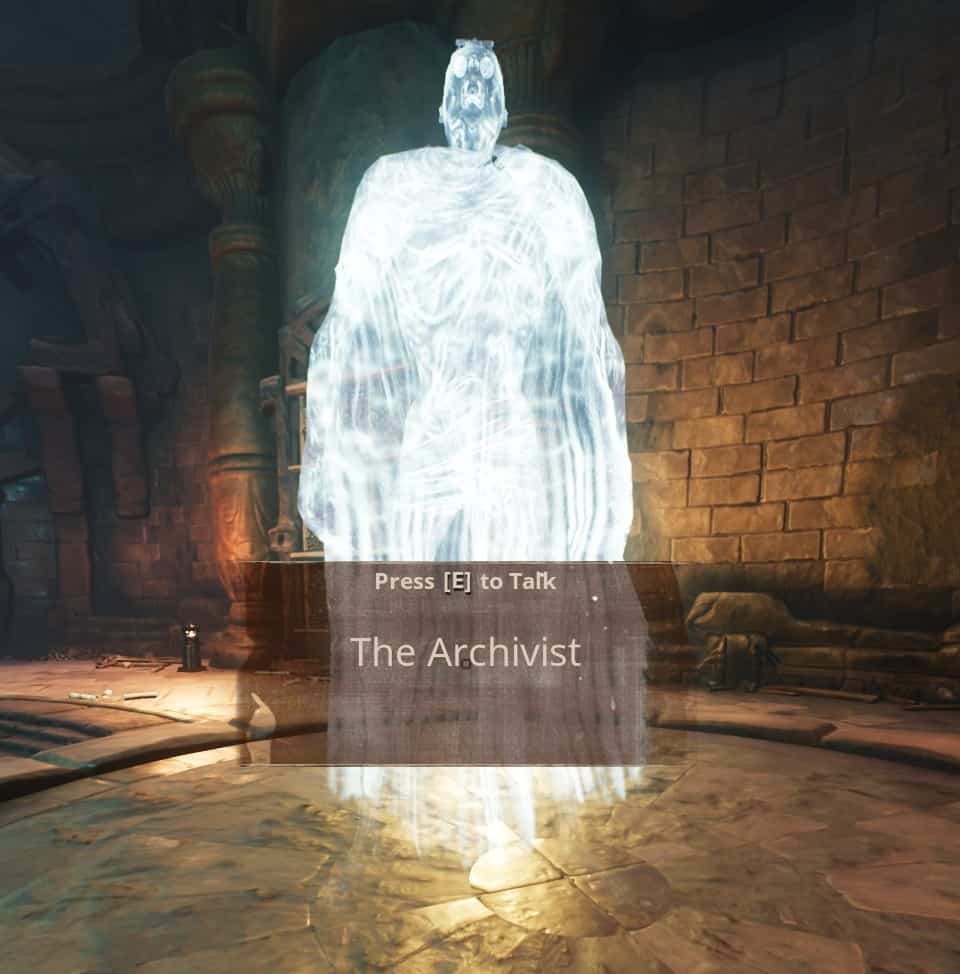 As you walk towards him, the options to talk with him will appear just by pressing “E”. A selection of options will pop up.

Talking with him and then clicking on the option “Learn Cartographer” lets you:

Side note: you came here to learn about Corrupted Stones, but he can also – spoiler alert – explain to you how to free yourself from your bonding bracelet if you just select the Talk option.

With Cartographer learned from The Archivist, you now know how to craft Map-Rooms but also the recipe to craft Corrupted Stones, which are fundamental, being an ingredient for the Map-Room itself. As you can see in this image, you do not need to achieve a particular level to learn these recipes or use them.

Side note: if during your Conan Exiles experience you are going to unlearn feats (yes ladies and gentlemen: if you misclicked and spent points on wrong choices, you have the chance, by drinking strange colorful potions, to reset your skills), However, don’t panic because the feat Cartographer will remain in your basic knowledge.

The Unnamed City is an open zone where, in fixed spots, there are bosses. So even if it’s not required to be at a minimum level to learn the Cartographer, it’s a good tip to be organized before starting your adventure.

Remind yourself to take at least a Bedroll with you. Different Bedrolls can be crafted but the basic one can be created right from the beginning of the game with easy-to-find ingredients. Then choose a safe spot outside the Unnamed City and position it on the ground. The game has a cruel method of teaching players that not all areas are ideal for a makeshift camp, so be careful where you place this.

The Unnamed City, being an open area with many different bosses, gives you the chance to fight powerful enemies and get pretty nice loot, such as rare ingredients but also high-level equipment. However, it also leads to some risky situations, especially if still at a low level.  This means that you could find yourself spending hours being killed, going back to your dead body to re-loot yourself (if nobody decided to beat you to it!) So, if you aren’t equipped for a huge battle, don’t go picking fights in this area!

Once you have acquired this knowledge you then need to spend at least three feat points to learn the Firebowl Cauldron and you will also need to reach level 15. With this feat, you will learn many recipes, but among these, there is the Alchemist Bench one. So, you have to craft an Alchemist Bench and put it in position.

Now you can just fill the bench with the needed ingredients, click on the Corrupted Stones icon and let the magic happen…

Ingredients needed to get 1 Corrupted Stone:

Pay attention because these quantities are specific for the basic bench; see the chart below for further details.

How to Use Corrupted Stones

As said before the Corrupted Stones are used to craft Map-Rooms that let you teleport to different zones of The Exiles Lands where there’s an obelisk that lets you spawn near it without running through the whole map. But these can be used only in The Exiles Land version of the game because in the Syptah world (the new expansion of Conan Exiles) there are no obelisks. so, even if you craft the Map-Room, you will be unable to use it effectively. Check out our complete guide on the Map-Room here!

Corrupted Stones are also a needed ingredient to craft:

Question: Where to get Corrupted Stones in Conan Exiles?

Answer: Corrupted Stones aren’t gathering materials; instead, they have to be crafted after learning the recipe talking with The Archivist located in The Archives (D-E/6 of the map) in The Unnamed City, through the Cartographer feat.

Question: How to make Corrupted Stones in Conan Exiles?

Answer: Corrupted Stones can be crafted using an Alchemist Bench. This bench can be crafted with the feat Firebowl Cauldron, so just learn it (requirements: minimum level 15 and 3 points). Then fill the bench with a specific amount of the required ingredients (Stones, Ichor, Demon Blood) and just start crafting; you can take a look at the chart above for details. The Corrupted Stones can also be crafted on all the other benches (Improved Alchemist Bench, Trade Alchemist Bench, Precision alchemist bench) making the recipe cheaper in terms of ingredients required for the same amount of Corrupted Stones, or making it faster as time spent crafting but more expensive in terms of ingredients. Remember that you can also use benches already crafted by someone else in your clan.

Question: How to mine Corrupted Stones in Conan Exiles and which are the best locations?

Answer: Although the word Stones in the item name, Corrupted Stones, may be confusing, these are not, sadly, gathering materials. This means that there’s no map with fixed pins to spam your pick or pickaxe. Instead, have to be crafted after having learned the recipe talking with The Archivist located in The Archives in The Unnamed City (D-E/6 coordinates on the map), through the Cartographer feat.

Question: What are Corrupted Stones used for in Conan Exiles?

Answer: Corrupted Stones are a fundamental ingredient required to craft Map-Rooms and many decorations. While these decorations are pretty nice and can be used to beautify your manor, Map-Room can greatly improve your experience and performance in the game. It’s a round item, requiring a platform of 8×8 foundation, that is a reproduction in miniature of The Exiles Land map. And all around it, there are clickable pillars that can teleport you to the corresponding obelisk in the world. Side note: you can craft Map-Rooms even in the Syptah map of the game, but it won’t teleport you anywhere since in that world there are no obelisks.