I think the most beautiful thing about Conan Exiles is how rewarding relaxing at your base can be. It may not be the most expansive game when it comes to gentle, daily chores, but the difficulty of the rest of the Exiled Lands makes them incredibly peaceful. There are some tough times out there in the world, and The Purge is always around the corner, but without these dark spots, base building wouldn’t be so rewarding.

Your base location says a lot about you and what you like to do. Waterfront property has always been my thing in survival games, and Conan Exiles is no different. I love having a base on the water and working fish traps wherever my build takes place on the map. It gives me peace in between stressful outings.

If you are new to Conan Exiles, you’ll likely be building on the banks of the southern river with the lumbering Shalebacks and toothy crocodiles. This is a great location for a fish trap or a shellfish trap! Throwing together one of these traps is an excellent way to get a leg up when it comes to feeding yourself and your thralls. It requires at least shallow water, so a waterfront base is a great place to have one.

When you’re building your first trap, there are a couple of things I’ll say right off the bat. A fish trap will not catch fish passively; it will need some bait (bugs!). The best way to farm these bugs is with a compost heap, but harvesting fiber will do in a pinch. It will require level 17 to craft either the fish trap or the shellfish trap. You will need the Conan Exiles: Isle of Siptah expansion to craft either the improved fish trap or improved shellfish trap.

How to Craft a Fish Trap or a Shellfish Trap 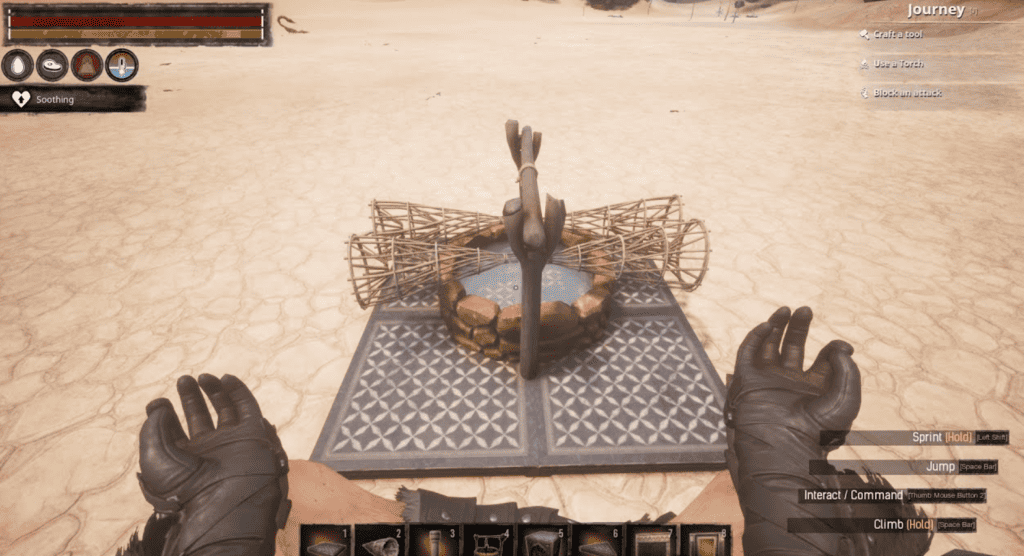 Once the player is level 17, they can learn the fish trap under the home menu of the feats menu. This feat also teaches you the shellfish trap and some fish trophies that can be crafted at the artisan bench.

The recipe is in your inventory crafting menu, though you’ll have to pull the stack of 10 shaped wood from the carpenter’s bench for either item.

Shaped wood requires ten wood at the carpenter’s bench. I believe Funcom made this decision so that the player could build a trap on the go, but it is a bit irritating.

So that means all-together, the fish trap or the shellfish trap requires 100 wood and 30 fiber, processed into ten shaped wood and ten twine.

Suit up Exile; you’re gonna have to deep dive for this one. You will also need to shell out some clams for the Isle of Siptah expansion.

Both the improved fish trap and improved shellfish trap are learned at any level with the Deep Sea Fishing feat. This feat is learned by interacting with a tablet on the right side of the room with a large fish carcass in The Sunken City. While you can learn it at any level, you will likely be at least level 60 with a good thrall and a couple of friends to make it safely around The Sunken City.

Resin can be farmed from trees using a skinning knife or a pick if you also want bark. It may also be produced in a wood dryer. Vines can be pulled off of trees (palms that look like they have vines) using a scythe.

You can get Scales of Dagon farming The Sunken City, The Harbor of the Drowned, or the Harbor of the Twice-Drowned on the Isle of Siptah. Their drop rate is low, but an axe seems to be the best harvesting tool to receive the Scales. Any of the mobs from this area have a chance to drop. 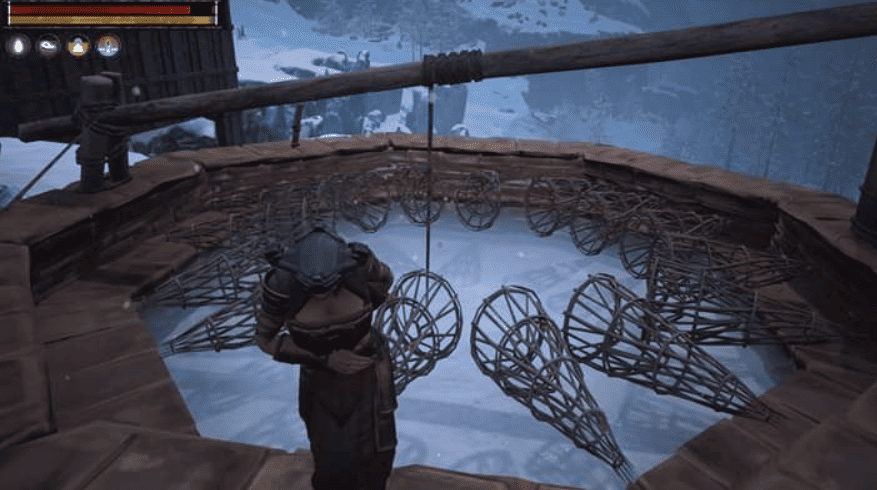 When you first start your Conan Exiles adventure, on standard server settings, there is only a need for one fish trap. The crafting time for “catching” a fish is low, and they stack in the trap’s inventory. It’s pretty easy to throw a stack of bugs in one and come back in a couple of minutes for your stack of fish.

How to Use Underwater Traps

The fish trap, shellfish trap, improved fish trap, and improved shellfish trap will only produce fish when supplied with bait. In order from easiest to acquire, these are a handful of insects, fat grubs, and worker bees. These baits can be found by harvesting plants, the same way you harvest the fiber. Compost heaps generate 50 grubs an hour, so once these are installed in your base, there will be no shortage of bait for fish traps.

These baits, in turn, “craft” different creatures in the different traps. The better the bait, the better chance you have at catching a better morsel. They do not increase the speed at which you catch them. There is no need to press the crafting “play” button; you will see it catching fish in the bottom right-hand corner of the screen. The improved fish trap has a chance to generate even better “buff” fish.

How to Use Fish From a Fish Trap 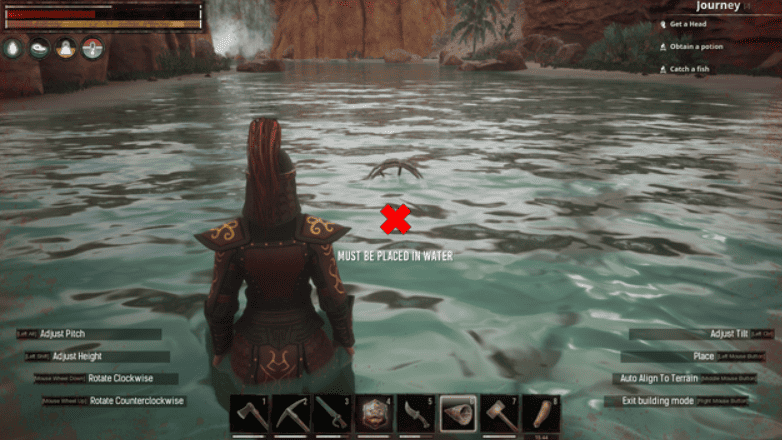 The three fish a standard fish trap can catch are the unappetizing fish, savory fish, and exotic fish.

Feeding thralls is a chore the larger your base grows. While not required to keep them alive, if a fish is in their “favorites” column, it will give them an hour-long strength buff and health regeneration if they need it.

In addition, cooked fish increase the chance (by 14%) of an added agility bonus while leveling a thrall. I use unappetizing fish for this, as there is no difference in feeding them a better fish. We can’t let them get too comfortable!

How to Use Fish From an Improved Fish Trap

The improved fish trap also catches the unappetizing fish, savory fish, and exotic fish, but also has a chance to catch the grouper, dogfish, moray eel, catfish, and angler fish. These fish give bonuses on their own when grilled!

One very important thing to note is that the spoil timer on these fish is very low. Like, just a few minutes low. I either have a fire next to my traps (for a beach cookout) or a preservation box to keep them in until I can haul them to my base. You will very likely miss most of your catches due to the timer and may wonder why your improved fish trap isn’t producing. This is to balance how powerful these buffs are. There is no free fish meal in Conan Exiles!

Maybe most importantly, later game, fish can be put in the fluid press to produce oil. Once you find yourself with the time and resources, consider adding more fish traps and farming oil. Realistically, you will also be farming compost and using the grubs that are generated in your compost heaps to stock these traps.

Only the savory and exotic fish will produce oil, so don’t bother with the unappetizing fish (try putting them in the thrall pot). Oil is used as fuel in most stations that require fuel.

If a recipe requires a specific type of shellfish, you may think about committing the resources to craft one of these. Otherwise, I believe currently shellfish are not worth the resources. Their only bonus is that they replenish more hunger when eaten. 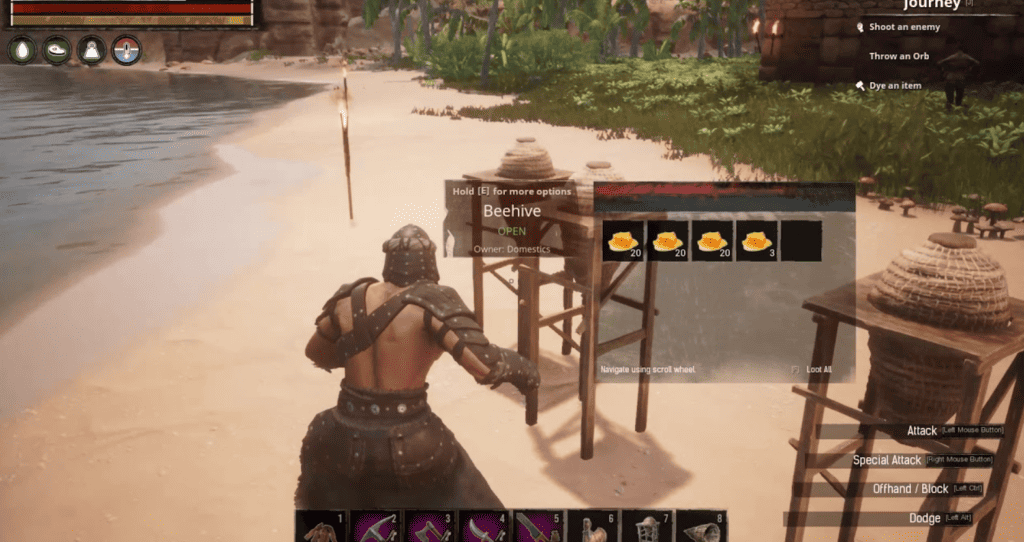 I love checking the row of traps next to the dock outside of my cottage every morning. It takes my mind off the whipping sand storms, lurking jaguars, and growing purge meter.

A trap is a great way to get ahead of feeding all those thralls or producing enough oil to keep your furnace going. If you are on the Isle of Siptah, they open up even more options for buffing yourself and your friends before going into battle. Throwing one in a shallow spot near your base won’t take much effort and is a helpful addition in the long run.

Question: Do I need a crafting station to craft a fish trap?

Answer: No, however, you will need a carpenter’s bench to craft the shaped wood required for a fish trap.

Question: Are there more types of fish than the unappetizing fish, savory fish, and exotic fish?

Answer: Yes, if you have the Isle of Siptah expansion. You will also have to craft an improved fish trap to catch them.

Question: Can I still use fish to farm ichor?

Answer: No, only oil in the fluid press from savory fish and exotic fish.

Question: Will fish buff my thralls?

Answer: Yes, they will receive a strength buff and health recovery. They also like this food and will have an added leveling bonus.

Question: What level can I learn at the improved fish trap and improved shellfish trap?