It’s not a far leap while playing Conan Exiles for your mind to drift to rotting things. The landscape can be dark and gritty, and death and decay are around every corner. A weak-hearted outcast may despair, but that’s not you! The more food that goes to waste, and the more death you experience, the more determined you become. Well then, Exile, why not use it to your advantage?

I’m talking about compost! Death will lead to a life with this little box of rot. Collect your carcasses and stockpile your dung; it’s time to grow some plants. Did you die 17 times collecting an interesting-looking flower or herb? Would you do anything to keep from returning to the area you found it until you gear up?

You’re in luck! If you manage to harvest any seeds on your travels, you’ll be able to regrow this plant from the comfort of your base. A compost heap will turn putrid meat, bones, and dung into compost for use in your planter and improved planter to grow seeds. The compost heap and crude planter are fairly early game items; you’ll be able to craft both at level 18.

How to Craft a Compost Heap 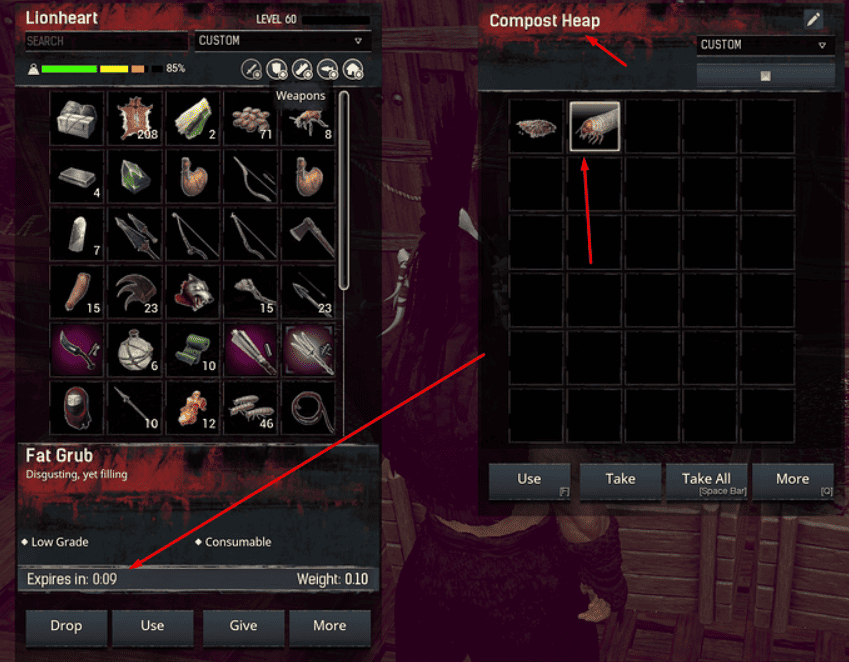 A compost heap requires 20 shaped wood. You can find the recipe in your inventory crafting menu, but you’ll need to use a carpenter’s table to make the shaped wood.

You’ll learn how to make a compost heap at level 18 after learning the peasant feat. The peasant feat is found under the home menu of the feats tab, in the main survival category, and also allows you to create planters.

Of course, you will also need to craft a crude planter for your seeds and compost. This requires 25 bricks, which will need to be smelted from stone in the furnace. Besides the fuel, this will require 250 stones and a furnace.

“Processing” Compost in the Compost Heap

Don’t be fooled early game and discard your putrid meat; everything in Conan Exiles has a use, and you’ll find putrid meat annoying to come by later in your operation. Honestly, I try to hang on to everything I come by in Conan Exiles. I’d much rather build a spare storage box than have to go find it later!

So how do we turn putrid meat into valuable compost? Let it rot! Let’s break it down:

My favorite early game recipe takes five fiber, four bonemeal, two putrid meat. You will need to craft a grinder to turn any bones and other body parts you’ve already harvested into bonemeal. If you are short on bones, try putting human and animal parts into a fluid press. Nice!

The second recipe is great once your base is established with a full animal pen; it takes five plant fiber and ten dung. If you were wondering what to do with all that dung in your animal pen, now you know! 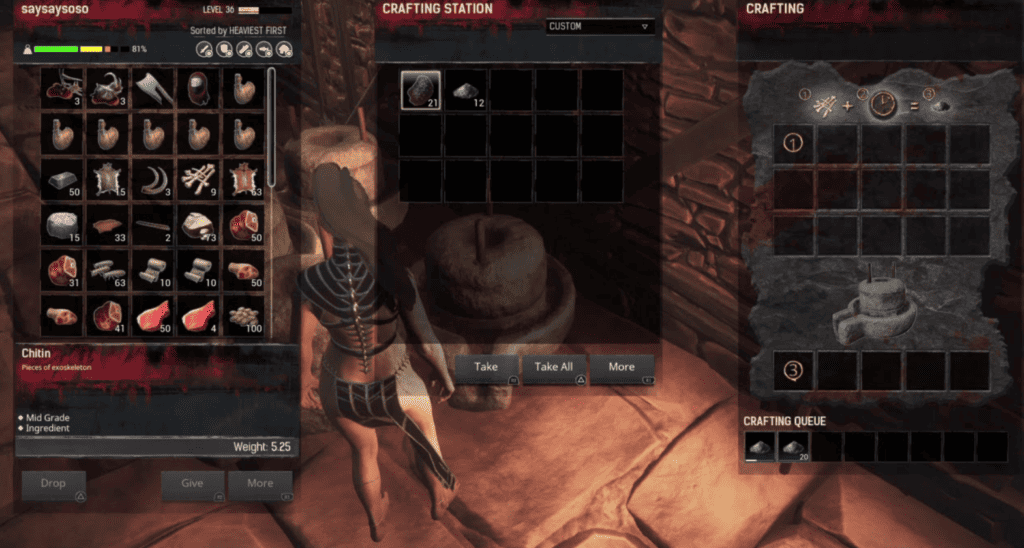 It appears these two recipes were designed to have one ingredient that is a little more difficult to come by. It truly depends on your play style! I think it’s clever to have one recipe geared towards homebodies (basebodies?) and one easier for players that like adventuring outside of their base’s walls.

For those that like to adventure, bone meal can be processed by putting one bone in the grinder, which yields four bonemeal. You may also put fangs, horns, etc., in the grinder to yield bonemeal. If it is a carcass or head, try it in the fluid press! Regular bone, though, is the most efficient way to get bonemeal.

Bone is harvested from a dead human or animal. In Conan Exiles, the tool you use to harvest fallen enemies makes a big difference in your yield. The ax yields the most bone when harvesting a corpse. However, as with most things in Conan Exiles, efficiency across the board is a big concern when you are outside of your base. Consider using a cleaver as it yields the most meat for yourself and your thralls, and often, a head for mounting or processing in the fluid press for a decent amount of bone and blood.

For those that prefer base building, dung is very simply a by-product of housing animals in your animal pens. The animal must be fully grown to produce dung and other products. They also must be able to feed off of applicable food in the animal pen’s inventory.

Very curiously, once an animal is removed from the animal pen, it cannot be placed back into the pen. It will now become a combat pet to either guard your base or follow you into battle. It makes sense, then, to have a couple of animal pens—some for production (including dung) and some for growing combat pets.

If you have created a single-player or co-op server, unfortunately, this production becomes incredibly tedious. The days do not continue to pass after logging off, and while this may save you from the purge, crafting timers will not continue as you sleep. For long crafting timers like in the animal pen, it’s a real disadvantage.

You’ll need potent compost to grow any of the lotus flowers. The lotus flowers can be turned into potions to increase stats at level 58. Beware, there are negative side effects with these potions, and you will also want to create a set antidote to negate these negative effects.

The recipe is two compost, two blood, and two raw ash. Blood is acquired from the fluid press. Try smashing some remains; they usually yield bones (which can be used to make regular compost) and blood.

If your animal pen is overflowing, there is another recipe with more dung: 2 compost, ten dung, two raw ash. 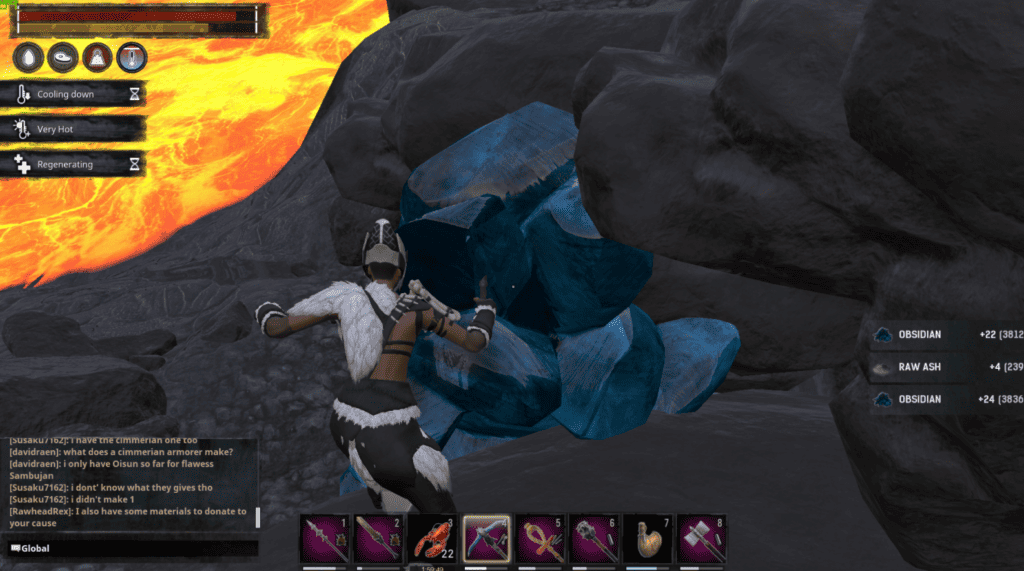 Potent compost is a mid-to-later game effort; you’ll need access to the volcano area of the map to farm raw ash from obsidian nodes. There are also obsidian nodes behind the black keep, but the temperature is still an issue.

As with farming bone, raw ash plays second fiddle to the primary resource I’m gathering while sweating to death near a volcano. You may find raw ash as a drop while farming obsidian nodes with a pickaxe, but you’re probably most interested in as much obsidian as you can carry.

If you truly are only interested in the raw ash, using a sickle on an obsidian node seems to yield the most.

What Do I Need Compost and Potent Compost For Anyway?

It seems like spoiled meat and dung would be the least likely things to hang on to in a survival game, but compost is required in a planter to grow seeds. Seeds will not grow passively in a planter; they must have compost.

Instead of speeding up the crafting time, Funcom chose to have some seeds that require potent compost to grow. Don’t bother to try and create potent compost unless you need to grow lotus seeds. 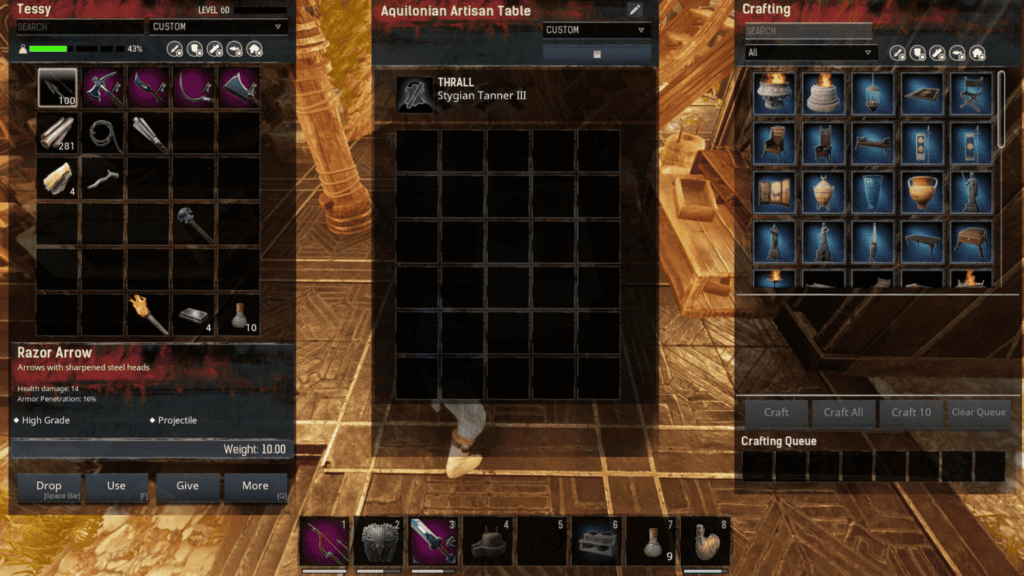 Arguably the most important feature of a compost heap in Conan Exiles is the nasty crawlies that hide within. If you leave compost in a heap, it will indefinitely produce grubs. Grubs catch fish in the fish trap, which spoils into putrid meat and makes more compost!

A compost heap will produce 50 grubs in an hour that spoil within the hour. This constantly keeps the stack at around 50. The great news is that grubs have a better chance than a handful of bugs of catching better creatures in the fish trap, the improved fish trap, and the shellfish trap.

It’s All About the Aloe

Farming is meant to be supplemental in Conan Exiles. What I mean by this is that it cannot be self-sustained as it could be in real life. The planter only consumes seeds; it does not create more seeds. For this reason, I suggest using your compost to grow any seeds you find besides normal or “fiber” plant seeds. Fiber is easy to come by; use your fiber plant seeds to make gruel in the wheel of pain!

If you don’t end up with more compost than seeds, I will put priority on growing aloe. Aloe is used at an alchemist’s bench to create aloe extract (and its upgraded versions). This is Conan Exiles’ version of an almost instant health potion. With a little rolling and dodging (and some great timing), aloe extract will save you from a long run back to your rotting corpse. 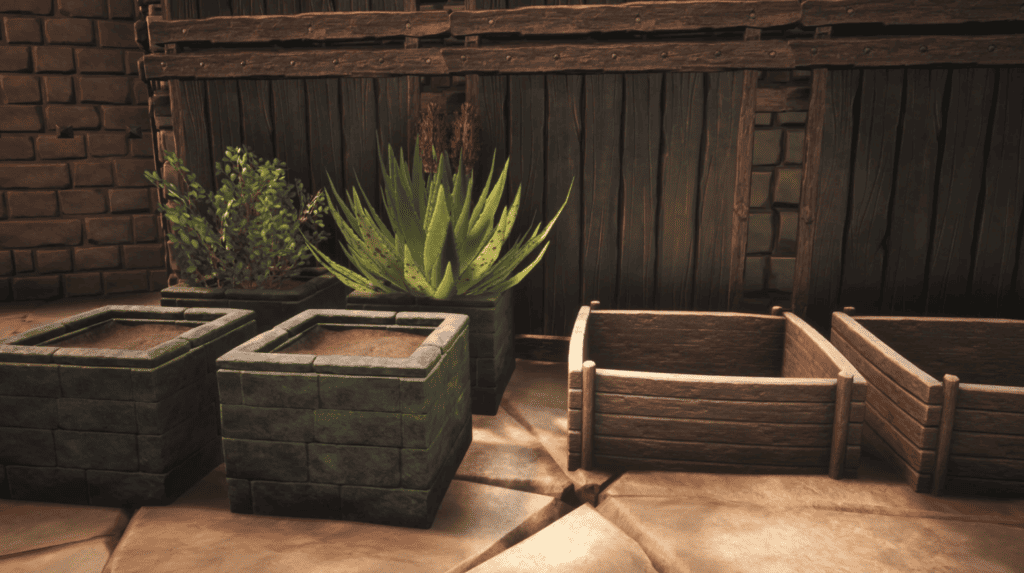 I find that Funcom has tried hard to have a symbiotic relationship between its items in Conan Exiles, and I, for one, appreciate it. I remember dumping my inventory all over the map the first game I played and have since learned the value of hanging on to even the gross things.

While farming is not as fleshed out as it is in some other survival titles, it serves its purpose. Having rare plants by your front door is deadly convenient compared to running back and forth across the map for them.

Question: Will seeds grow without compost?

Answer: No, you’ll need to make compost or improved compost (depending on the seed) before seeds grow in a planter.

Question: Do I have to have dung to make compost?

Answer: No! You can create compost with bonemeal instead.

Question: Will potent compost speed up my growing time?

Answer: No, you’ll want an improved planter for that.

Question: Will grubs continue to spawn in the compost heap if I leave compost in it?

Answer: Yes, however, they despawn in the bin quickly. If you take all the compost out, make sure to grab the grubs.

Question: What type of plants do I need improved compost for?

Question: What’s the best plant to grow with compost?

Answer: This is debatable, but you’ll never get sick of aloe.