Wow! You’re really becoming quite the operation. It seems you have a crafting bench for every task under the desert sun tucked neatly away in your fortress. You’ve picked them up, or torn them down until you’ve managed to situate everything exactly how you like it. Maybe that’s when you pulled up your feat menu and realized almost every bench you’d spent hours organizing and placing was ready to be upgraded into a brand-new (and often larger) crafting station.

This is certainly the way for the wheel of pain. Your lesser wheel of pain is a relatively small station, and maybe you only allowed space inside your wall for a pretty small thrall-making operation. That’s ok! Now is the time to knock down some walls and expand your base. All your compound really needs is more friends anyway, and that’s exactly what your bigger and better wheel of pain is for.

TL:DR: What’s Up With the Wheel

What Are the Wheel of Pain and the Torturer’s Worktable?

In Conan Exiles a wheel of pain is a crafting station. To start the crafting process, you’ll need to place a captured exile in the wheel’s inventory along with plenty of almost any food. Your exile will begin spinning the wheel, round and round, until their attitude has been adjusted and they are friendly to your cause. A taskmaster thrall can be added to the wheel of pain to decrease the amount of time required to craft a thrall at that wheel. Any exile that can be crafted into a thrall can be placed at a wheel of pain.

How to Craft a Wheel of Pain

How to Craft a Torturer’s Worktable

Though you’ll learn a torturer’s worktable under the same feat as the wheel of pain, you may be a higher level before you’re able to construct one. A torturer’s worktable requires 50 shaped wood, 25 steel bar, and 25 twine. The shaped wood is no problem if you have a carpenter’s bench, but steel requires processing brimstone and tar into steelfire in a firebowl cauldron and then combining that with iron at the furnace to craft. If you have already established steel production, dive right in and craft a torturer’s worktable. I like to hit Sinner’s Refuge in G4 for my brimstone needs, but you’ll find the nodes in several caves across the Exiled Lands.

Food is the “fuel” required for the wheel of pain crafting station. Unlike the animal pen, it doesn’t matter what type of food you feed your new thrall on the wheel of pain. They will have the same stats when fully crafted no matter what type of food you feed them. For this reason, manufacturing the cheapest food possible is the way to go when it comes to stocking your wheel.

Gruel fits very solidly in this category and is what most players use to fuel their wheel. You’ll only need 5 plant fiber and 1 seeds to make a 10 stack of gruel. You can stack 100 to keep in your wheel of pain without much effort at all. In fact, you won’t even need tools to collect the ingredients, fiber and seeds can be collected from most plants by just using your hands.

So you’ve built your wheel of pain and stocked it with gruel. To prepare for capturing a thrall, you will need to craft a truncheon and bindings. Simple versions are available to craft with just your hands from your crafting menu, but higher-tier truncheons and bindings require a torturer’s worktable to craft. I highly recommend rattling around in your chests for enough supplies to make a shield to go with your truncheon. Even the most inexpensive shield will help while wielding the truncheon against your intended thrall.

You must use a truncheon because the goal is to knock out the intended exile, not kill him. When you’ve spotted the exile of your dreams, kill all of his friends (so you don’t have to deal with them) and equip the truncheon and shield. Knockout damage is designated by a grey bar under their health bar and you must fill it before the exile fall to the ground. Consider equipping a combat thrall with an additional truncheon to help knock out your new friend.

Once the exile is knocked out, equip your bindings and attach them to the exile. You’ll then be able to drag your exile all the way back to your wheel of pain. The length of your commute will degrade your bindings, so consider upgrading your bindings if they are falling apart on long hauls. To craft chain bindings you’ll need to station a T3 or T4 taskmaster thrall at your torturer’s worktable. You may use bindings from horseback and with a one-handed weapon equipped, increasing your chances of survival on the journey home.

When you interact with the wheel of pain while holding the bindings attach to your thrall the game will automatically deposit your thrall into the wheel’s inventory. Once you have added food, or if there is already food in the station’s inventory, your exile will begin pushing the wheel and crafting into a usable thrall. The only way to decrease the amount of time this takes is to place a taskmaster thrall at the station.

Until Death Do You Part: Taking Your Thrall Off the Wheel of Pain

The type and tier of exile you capture will dictate the type of thrall and exile you will have at the end of their time on the wheel. The first step is to put the finished thrall in your inventory. If they are a fighter, entertainer, or archer put them on your action bar and place them in the world once they’re done crafting. When they are placed, you’ll have access to their menu, stats, and inventory. Most importantly, you’ll now be able to choose a name for your new friend.

You’ll need to direct a fighter to follow you if you’re ready to get straight out into the world to start leveling your new thrall. If not, they will stay and defend your base. Don’t forget to equip them with a sword and your old plant pants, at the very least. Stress-reducing tip: Wherever the last place you told your thrall to stop following you is will be where they return if you die and they clear the threat. Always best to make this home base.

An entertainer provides a healing buff and removes corruption in their vicinity. You can equip them with daggers and take them along on your next corruption-filled adventure. They also do a very cute dance and can be dressed up however you like, if you’d rather keep them safe at home.

If you’ve managed to snag a crafting thrall (blacksmith, tanner, etc), just carry them to the appropriate bench and place them in the thrall box in the crafting station’s inventory. You’ll be able to see them at work at their new station while they are effectively applying their bonus to the bench.

It is no longer necessary to feed thralls in Conan Exiles. It is, however, beneficial to keep food in a combat thrall’s inventory. Food applies a healing buff when your thrall is injured in combat. Generally, the better the food, the better the healing buff. You’ll see a list of preferred foods under your thrall’s inventory to get you started. Food also provides bonuses to specific stats while your thrall levels. For instance, gruel increases strength by 14% every level, while grilled steak increases vitality by 14% every level. Some foods also applied a strength buff if consumed in combat. 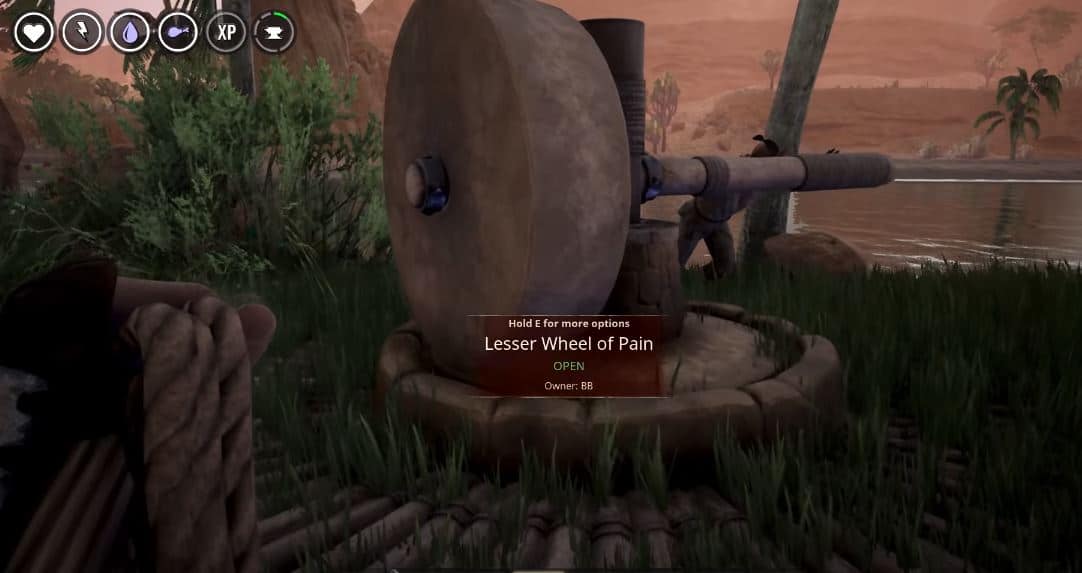 There are a couple of benefits to crafting a wheel of pain over crafting several lesser wheels, even with the 200 iron reinforcement required in mind.

Additionally, the wheel of pain has 150,000 health where your lesser wheels only have 30,000. It is much less likely to be destroyed in a raid, or more likely, a purge attack. The purge’s entire purpose is to flatten your base, and T1 crafting stations will quickly be reduced to rubble if the purge is not disposed of quickly. It is always better to upgrade stations if the purge is turned on for your server.

Similarly, the greater wheel of pain has all the same benefits. It can break 8 thralls at once and has 300000 health and looks very cool.

Tell Me More About the Taskmaster

As stated, the main reason you’d upgrade to a wheel of pain is that you’ve either already secured a taskmaster thrall, or you are considering it. Taskmaster thralls decrease the amount of time to break a thrall at their wheel of pain from 25% to 150%, depending on their tier.

Taskmaster thralls can be identified by their truncheons and bindings, or their names if they are T4. They are not meant to be easy to find, and even if you learn of a spawn location you’ll likely have to clear the camp a couple of times before the taskmaster spawns in.

A taskmaster is more than just a wheel of pain guru, she’s also a valuable addition to a torturer’s worktable. If you’ve got plenty of time on your hands for breaking thralls, consider using her truncheon bonus instead. If you have a taskmaster stationed at a torturer’s worktable the truncheons crafted there will have more concussive damage and be more durable. The higher tier the taskmaster the larger the bonus!

The Wheels at the Base Go Round and Round

There’s nothing better than a full wheel of pain! You’ve done the hard work finding and capturing enough thralls to fill it, you’ve left them some gruel, and now all you have to do is wait until they’re done pushing. If you’ve placed a taskmaster thrall at your wheel of pain, they’ll be done crafting in no time. It’ll seem like you just returned when it’s time to head back out and drag home some more.

Question: What is the point of the wheel of pain in Conan Exiles?

Answer: The wheel of pain can turn a captured exile into a helpful thrall. All you’ll need is the exile and a stack of food.

Question: What is the best food to use in a wheel of pain?

Answer: Food has no effect on breaking thralls, so you should use the cheapest or most abundant food possible. In most cases that food will be gruel.

Question: How can I make my wheel of pain faster?

Answer: Stationing a taskmaster at your wheel of pain is the only way to make it faster. Taskmasters are exiles that can be found throughout the world, captured, and turned into thralls.

Question: What is the benefit of upgrading my wheel of pain?

Question: How do I get a better truncheon in Conan Exiles?

Answer: You must craft a torturer’s worktable to craft better truncheons and bindings. Stationing a taskmaster thrall at this worktable will give a durability and concussive damage bonus to any truncheon made there.

Question: Why did my thrall stop pushing my wheel of pain?

Answer: If you can still see your thrall, you’ve run out of food. If you no longer see the thrall, it is either done crafting and in the wheel’s inventory or was stolen by another player.