Elephants are massive in Conan Exiles. They have big sweeping attacks, knockdowns, charges, and stomps that can throw a player 20 feet into the air. When I first bumped into one in the savannah biome, it gave me pause. Sure, the tigers and rhinos I had killed to get close enough to lock eyes with this massive creature should be a good indicator I could win the fight.

I had even killed the lion up on a swagger rock, which is where I spotted the pachyderm off in the distance and decided to keep pushing forward. None of these was a huge challenge, but could I take on an elephant? What did Funcom have in store?

I ended up surviving the encounter but was fortunate that a tiger got involved somewhere in the middle. Afterward, I spotted the two elephant calves that you’ll be looking for if you want your very own stompy death machine. Elephants are unique mobs in Conan Exiles, and similarly, they make very unique pets.

TL:DR: the Fearsome and Useful Elephant 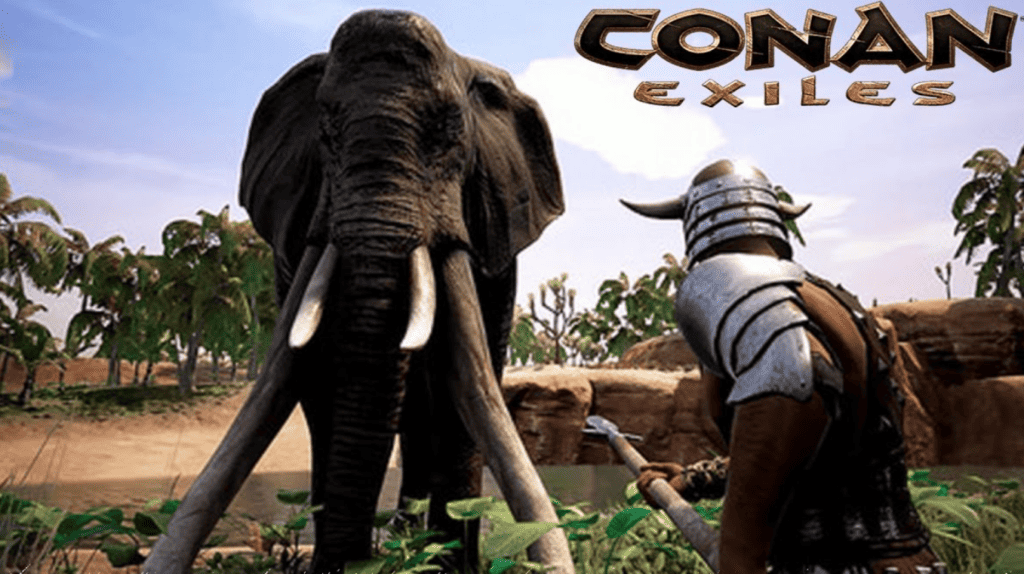 If you’re the type that likes to bump across the desert in style, collecting every treasure you find along the way, an elephant may be the right pet for you. Their attack pattern is pure chaos and destruction. Every attack is some form of knockdown, with tons of movement and multiple enemy attacks. Their attack power is low, so they are better as team players than they are soloing a camp.

Mostly, they are the ultimate cargo animal in the Exiled Lands. They have a 30 slot inventory, which is the largest in-game. Use your elephant for cargo hauls and troop transport. It’s convenient to have a wagon that can defend itself and stir up a mountain of trouble when the battle starts.

Elephant calves can be found in the savannah next to their parents in lower G8. Bark or shadespiced bark will give you the greatest chance to turn your elephant calf into a grey elephant or mammoth. The grey elephant or mammoth are both “greater” and rarer versions of the pet elephant, but the mammoth has a much higher health pool and is what most folks aim for when raising elephants.

Where to Find an Elephant Calf

Adventuring to the savannah is not for brand new players. I would recommend getting to at least level 30 before setting out for your calf and making yourself a set of iron gear. You’ll need to be able to handle a couple of tigers or rhinos at once; they like to dogpile around the oasis. The challenge will be with the adult elephants; they have very high hp and nasty, sweeping attacks. A long battle with them will bring other mobs or the other elephants, and you’ll be lucky if they’re not all aggroed onto you.

You will find elephant calves in the southern stretch of G8. They are so large that you may confuse them with another aggressive mob but rest assured, they will fit in your inventory without a fight.

There are two (sometimes 3) calves that spawn in this location, though like other baby animals, they can wander. They are very heavy; you’ll want to bring a thrall, animal companion, or horse to carry both backs to your animal pen. Because there are only two calves available, and mammoths have a low chance to craft, players will often circle the area waiting for respawns. If this is your plan, I recommend at least 15 minutes out of render distance (in a single player) to reset the calves.

What to Do With Your New Calf 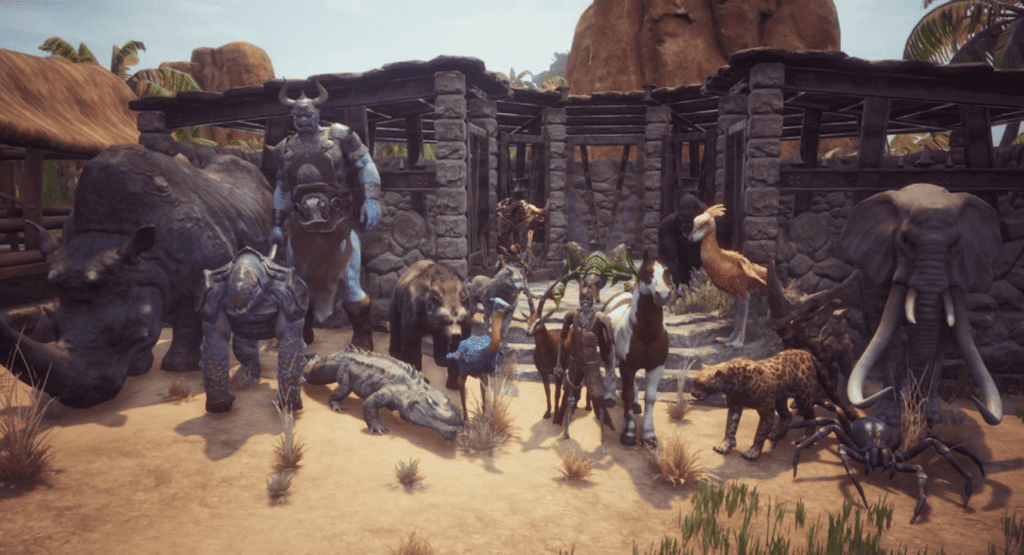 Hauling your calves back to the animal pen can be daunting on its own, but you’ll need to make sure you feed them correctly once you’ve returned. An animal pen can raise five elephant calves at once, and you’ll only need one item from a stack of applicable food to start the crafting process.

Calves are heavy and can be annoying to deal with; you may store extra elephant calves (if you’re going for a mammoth) in a box briefly. They do have a rot timer and will disappear in a normal crate. Use a preservation box to keep elephant calves long term. Nothing like a fridge full of elephants!

Put your calf and food in the inventory, and the crafting bar will show up in the bottom right-hand corner, the same as other crafting stations. Elephants eat most vegetation, and unless you want it turned into dung once the animal is fully grown, remove the excess food once the crafting process has begun. Same as thralls and other animal companions, you do not need to feed them to keep them alive.

Who is the Greater Elephant? Grey Elephant VS Mammoth

Elephant calves actually have two rarer versions that they may grow into. Both the grey elephant and the mammoth have an equally small chance of crafting from your calf, though they do not equal as adults. While the grey elephant is a more dangerous-looking pet than a standard elephant, its hp and armor are the same. Its attack is raised, and it has more special/knockdown attacks than the standard elephant, so there is no shame in rolling out with your new grey elephant.

The mammoth, however, is the true “greater” version of a standard elephant. It has three times the hp, higher armor, and higher attack compared to a normal elephant pet. Mammoths can hold their own in a fight once they are maxed level, as well as carry every cool-shaped rock you find on the way.

How to Raise a Grey Elephant or a Mammoth 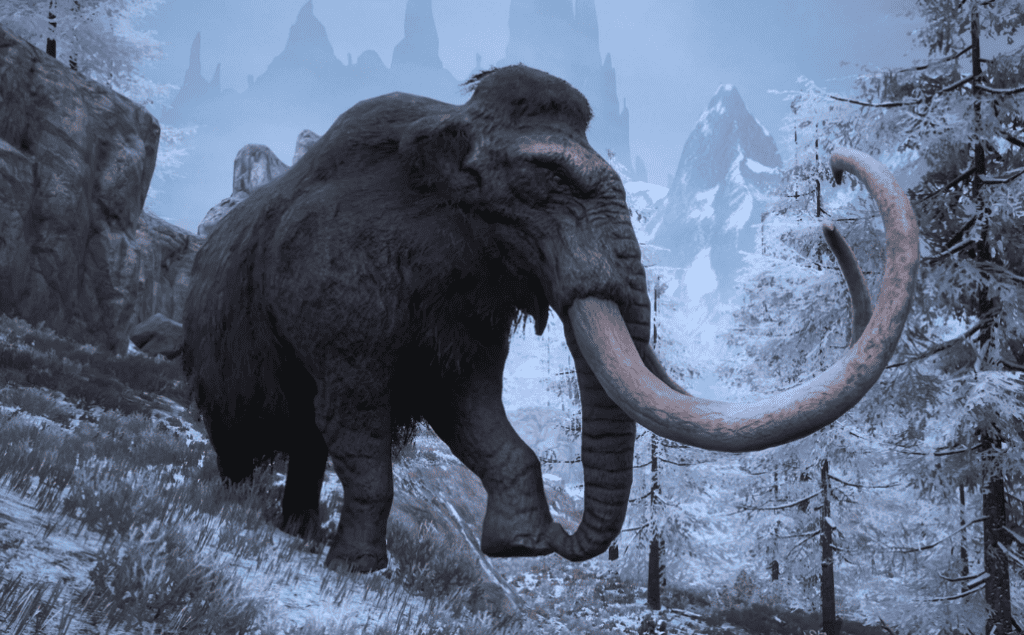 You’ll need to feed your calf special food in the animal pen if you want a chance at crafting a grey elephant or mammoth. Both bark or desert berries give the highest percentage of crafting a mammoth or grey elephant without shadespiceing at only 4%. If you shadespice them, this goes up to a 12% chance for each. Because of how scarce calves are and how difficult it is to RNG a mammoth, I would definitely recommend shadespicing your bark or desert berries.

The easiest way to collect mountains of shadebloom for shadespicing is to run the midnight grove. This dungeon typically requires five players, but it can be soloed at level 60 with some decent gear, a good pet, and plenty of aloe soup. If this is out of your reach, one-skull beasts around the world will drop shadebloom. The lion I mentioned on swagger rock is actually a great example of a quick mob to kill while collecting calves to stock up on shadebloom.

What to Feed Your New Elephant

Animals grow their stats just like the player does as they level, but instead of directly placing stat points, you choose what stats will grow the most by what you feed them. As predominantly a cargo animal, you’ll want to increase your elephant’s vitality the most every time it gains a level. This will make her a viable, durable wagon even as you traverse the most deadly terrain in the exiled lands.

To increase your elephant’s vitality by 14% at every level, you need to keep plant fiber in its inventory. What a cheap date! Elephants are the easiest pet to keep fed and happy.

Combat with a Pachyderm

Most players use elephants primarily as cargo carriers, but cargo carriers that can defend themselves. Elephants have one knockdown move, while mammoths have three. A fight with a mammoth is chaos and quite a bit of fun. Multiple enemies are no problem and will be thrown across the camp for you to pick off while they’re down.

An elephant’s attack is low, so you’ll need to be the damage dealer if it’s just the two of you. Even a mammoth has low attack compared to more combat-oriented pets. Everything is a trade-in Conan Exiles, you can’t have the massive inventory space and a damage bomb all in the same pet, but elephants, grey elephants, and mammoths can hold their own in a tough fight.

Question: Can you ride an elephant companion in Conan Exiles?

Answer: No! I don’t know why Funcom chooses to deny us the simple pleasure of a war elephant. Rumor is they’re working on it.

Question: Where do I find an elephant calf?

Answer: You’ll need to search the southern border of G8 to find an elephant calf. There can sometimes be up to 3 calves, but you’ll need to fend off the parents.

Question: Do elephants have greater variants?

Answer: Yes, you’ll have a small chance to craft a grey elephant or a mammoth. A mammoth’s stats are the best of any elephant variant.

Question: What do I feed my elephant calf to craft a greater elephant?

Answer: You’ll want to put shadespiced bark or shadespiced desert berries in the animal pen to give you the best chance to craft a grey elephant or mammoth.

Question: What do I feed my adult elephant?

Answer: You should feed your adult elephant, mammoth, or grey elephant plant fiber to increase its vitality while it levels. Once it is max level, you should feed it golden lotus for the highest health buff. If you are poor like me, try seeds for a moderate health buff.

Question: What kind of attacks do mammoths have?

Question: Do elephants make a good pet in Conan Exiles?

Answer: Yes! They are primarily used for transport. They have one of the largest inventories a companion can have and are easier to mass-produce than a bearer thrall.

An Elephant to Carry the Crew and You and Snacks

An elephant is a wonderful addition to your base and a practical decision when you need a companion to carry your treasures. It has the largest inventory of any animal companion at 30 slots. Not only that, but it can hold its own when things get tough out in the Exiled Lands.

Killing an army of elephant calf parents is only the first step in a long journey to raising a cargo mammoth. You’ll need some shadespiced bark (which isn’t particularly easy to come by) and quite a bit of luck. Whatever elephant you end up with, life will be easier with them by your side!