I think we all remember our first crocodile run-in as brand new exiles wandering the banks of the Exiled Land’s southern river. By the time you find a croc, you had probably gotten a little confidence fighting shalebacks and imps in the area. I’d gotten the aggressive shaleback combat series down to memory and was beating them to death with a stone axe when I heard my first ominous hiss coming from behind me.

It feels great when you take your first crocodile down. Short of accidentally running into a shaleback boss, they are the first real challenge for new exiles and their reptile hide will take your tannery operation to the next level. It is fitting that once your animal pen is constructed, they are the first great animal companion you’ll be able to reach to raise in it. Not only will they likely be your first real challenge, but may also be your earliest and toughest ally.

TL:DR: The More Teeth The Better

Snappy and fierce, the crocodile has many benefits as a combat companion in Conan Exiles. They are the first viable pet the player has access to and a great pet for new players to tame and level with. The hatchlings are easy to come by on the shores of F4 and G4, wandering next to their parents on the “newb river”.

Their attack is low, but they can stack bleed up to an impressive 20 times! This makes them weak against multiple opponents but very powerful against one (as long as they are not undead). One of the most beneficial aspects of a crocodile pet in Conan Exiles is that you are always able to walk over them, no more getting stuck in doorways or caves.

Where to Find Crocodile Hatchlings

Keep your eyes peeled for hatchlings as you wander the banks of the southern river. They are much smaller than their parents, and a lot less aggressive. Croc hatchlings will run from you when you get close, so be prepared to scoop one up. They are very heavy! It’s best to clear some inventory weight for them, especially if you haven’t started leveling up your encumbrance yet.

Crocodiles are even easier to get to than hyena whelps, and arguably the better pet. You can start looking for hatchlings is on the banks of the river at F4 and G4. They can be on the desert side of the island side and you’ll likely need to clear their parents first. If there are no hatchlings, try clearing the parents, staying in the render area, and returning in 15 minutes.

If you want the most reliable place to find crocodile hatchlings, with just a little more danger, the pond inland in G4 always has hatchlings. This pond is swarming with adult crocs, so I’d only advise looking here if they are no longer dangerous to you. If you’d like a sneak peek at what your greater croc will look like (just a little smaller) the crocodile king is on the north bank. He is a 3 skull legendary boss, so you’ll want to keep your distance.

What to Do With Your Hatchling: The Animal Pen

Once you’ve got a hatchling in tow ( I recommend as many as you can catch and carry) head back to your animal pen and drop them off. It only takes one meat in the animal pen’s inventory to start crafting one crocodile, any additional meat will be converted to dung when the animal is fully grown.

Before you feed them just any meat, you need to know that there are foods for each animal that increase your chances of raising a greater animal companion. A greater animal companion has much higher stats (and often a different skin) than its standard version. Not only will your crocodile look leaner and meaner, but will have the stats to match.

For crocodiles your best chance of crafting a greater crocodile is exquisite meat at 20% unless you can shadespice, then it is a shadespiced perfect cut of meat (shadespiced exquisite meat) at 30%. I would personally not recommend shadespicing your meat to raise your chances with hatchlings because baby crocs are so easy to find and shadespice is not. Just go out and grab several more hatchlings and try again if you had no success raising a greater croc with your first batch.

You will find exquisite meat by hunting kudo bucks and butchering them with a cleaver. These bucks are larger and more aggressive than their antelope friends. Ironically, because they will fight back, they are easier to hunt. If you’re skilled enough to snag crocodile hatchlings, a kudo should pose no threat to you while hunting for exquisite meat.

What to Feed Your New Greater Croc 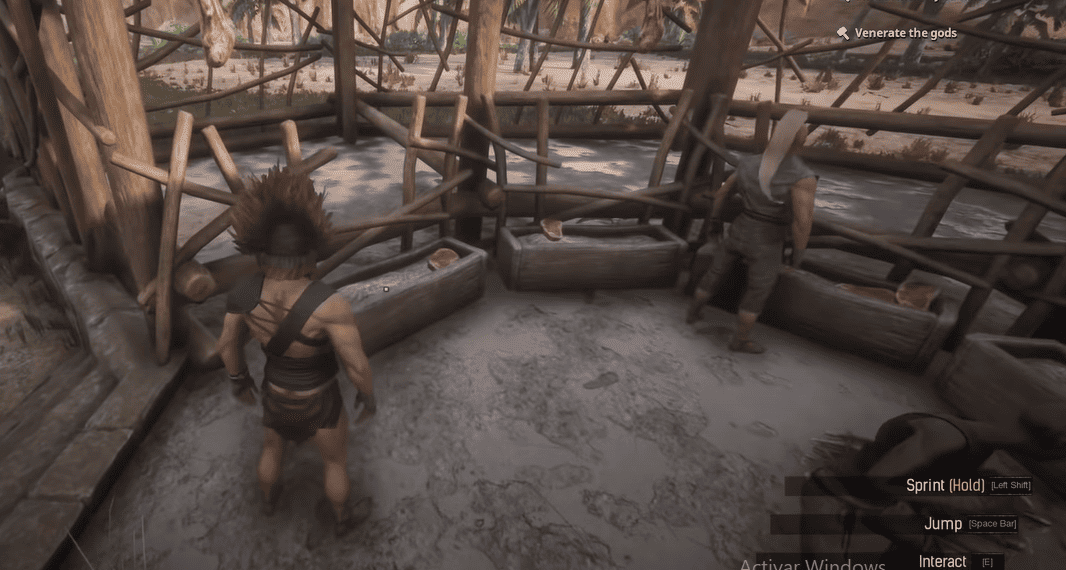 What you feed your new animal companion will determine how it levels. An assortment of preferred foods, specific to your animal’s species, increases different stats as it levels and consumes them. What food you choose, or what stat you increase, is a personal choice.

For crocodiles, especially if they are with you as a low-level player, I recommend increasing vitality (their health pool). They can do the tanking while you work on the killing. For increasing vitality in a croc, all you have to do is keep a stack of feral flesh in its inventory. Feral flesh increases your croc’s vitality by 14% at every level. Food also applies a healing buff while your pet takes damage, so make sure you keep more in their inventory than they need for leveling.

Feral flesh is the easiest meat to come by, which is another reason a crocodile makes the perfect beginner pet. Feral flesh will drop from other crocs, imps, hyenas, and most other creatures roaming around the southern “beginner” area. Don’t forget to use a cleaver instead of a skinning knife on the carcass if the flesh is what you’re after.

If you are raising one later in the game, maybe for shredding bosses with, you’ll want to feed raw pork. Raw pork increases your crocodile’s strength by 14% at every level. You can find raw pork butchering boars from the highlands. It’s best to be level 40 or more before trying to hunt in the highlands; where there are boars there are wolves.

Each food has a different level of health buff associated with it. Once your crocodile is max level, you can switch to bone broth for the highest health regeneration buff of 10 health/second. For convenience’s sake (if you don’t feel like cooking broth for your croc), raw pork is not too far down the list at 7 health/second.

How to Hunt With a Croc Companion 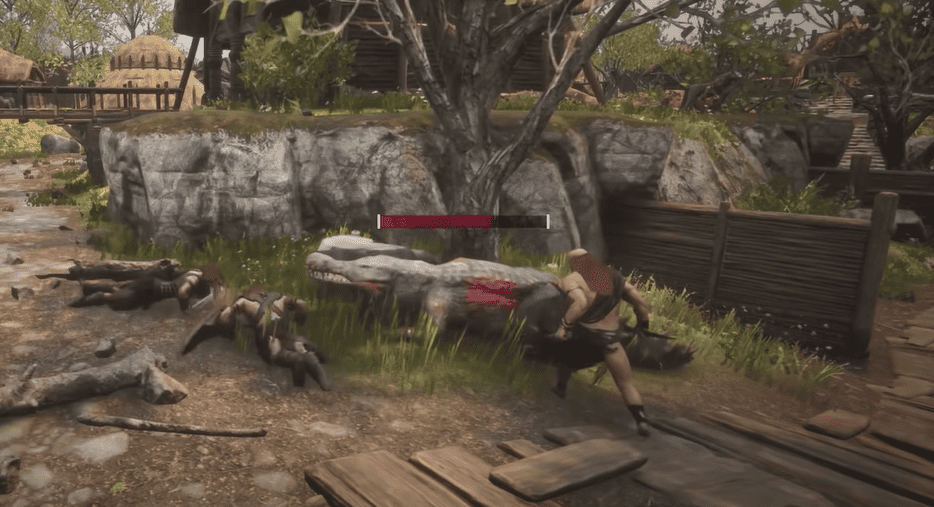 If you’re using a croc as a beginner player, there’s not much strategy to it. A greater croc will help you win battles that were unachievable before. As long as you are careful with it as it levels, they are a tough companion and you should be able to keep them with you indefinitely. Keep in mind that the best course of action, if you’re fighting a losing battle, is to run. You don’t need to give any action to your croc, once you are far enough away they will teleport to you and forget why they were so mad in the first place (hopefully before the last of their health is drained).

Once maxed, crocodiles are best for bosses and one on one situations. They start their combat set with a knockdown move. After that, normal attacks apply bleed, up to 20 times. Crocodiles apply the most bleed of any pet. They cannot be knocked back or stunned, making them a relentless partner against craftier foes, and their armor can get up to 90% damage reduction at max level.

One big argument I have for using crocs to level through a new world is not actually about crocodiles. It’s more about how annoying the rest of the animal companions and thralls are. Other pets and combat thralls, even the big cats, will awkwardly trap you in caves, doorways, cliffs, and any other tight spot you run into. This doesn’t sound so bad until you’ve experienced it several times over. Sometimes the glitch will even turn a tight situation into death, or cause you to restart your game (potentially losing your thrall or pet).

For whatever reason, maybe their awkward shape, or maybe their short stature, Funcom decided not to implement a physical box for a croc. The player can walk back and forth through them as if they weren’t there. This makes life easier when positioning for combat, kiting, and yes, just not getting stuck in a doorway. 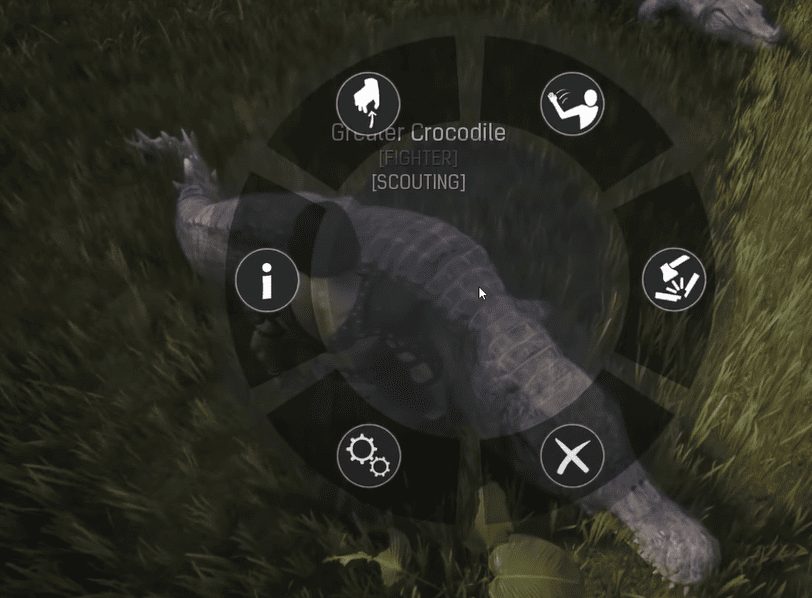 Crocodiles are the perfect beginner pet. Their relentless attacks, high armor, and bleed stack make them viable to end-game, but the hatchlings are easy to come by, as long as you have enough gear to take down their mother. Raise their health pool while they level with feral flesh, and you’ll have one tough croc by the time she is max level.

The bonus of being able to step over them in tight spots shouldn’t be overlooked. That ghostly sabretooth tiger stops looking so cool when she’s always in your way (Move Pamela!). If you haven’t played through all the areas of the game yet, and aren’t intimately familiar with its inconvenient nooks and crannies, do yourself a favor and take a croc.

Question: Where can I find crocodile hatchlings?

Answer: You can find them anywhere along the southern river in F4 and G4. The pond towards the desert in G4 is more dangerous, but always has hatchlings.

Question: What should I feed my crocodile hatchling to get a greater hatchling?

Answer: You should feed it exquisite meat from hunting kudos. Hatchlings are easy to get, so don’t bother shadespicing.

Question: What should I feed my pet crocodile while she levels?

Answer: You should feed her feral flesh for vitality gain, or raw pork for strength gain.

Question: What should I feed my crocodile pet once she is max level?

Answer: They are easy to find and feed for low-level players but have decent stats once max level. They apply the most bleed of any pet, and they are the only pet that does not get in the way and can be stepped through.