So you want to be an exile? Well, life in the Exiled lands doesn’t begin very glamorously. If you’re not being chased down by little naked gremlins, freezing in the elements, or dying of thirst, you’re likely starving to death. Spending all day chasing down one rabbit with a stone hatchet can be a fatal, inefficient mistake. Not only will you continue to starve, but it also doesn’t take much to run straight into a hyena, which will be a real headache in plant armor. What if I told you there was another way?

I was on my second or third play-through before I found out about gruel. I’d been out there eating bugs and slaying rabbits like an idiot! Not only that, I was using valuable food to fuel my lesser wheel of pain. It was terribly inconvenient to keep stocked and my thralls were constantly stopped at the wheel, staring at me for more steak. Funcom certainly has no intention of holding your hand after you’re cut down from that cross, and gruel was one of the items that rested firmly in my blind spot.

Crafting a stack of gruel is possibly the easiest way to stave off hunger for the first several hours of gameplay. It only requires a campfire to cook or “craft”. The ingredients are easy to acquire, you’ll need only 5 plant fiber and 1 seeds to make 10 gruel. You can harvest these ingredients by harvesting normal bushes, which you’ll be doing all day anyway for your full set of fiber armor (among other things).

While gruel can be a life or death item in the early game, its uses dwindle as the player has access to more filling options. When gruel no longer appears appetizing to you, it’s likely time for you to start crafting it for your lesser wheel of pain. Gruel is the perfect item to stack high in the wheel of pain and forget about. It does spoil, but fortunately, the ingredients are so easy to come by you won’t mind.

You may also consider continuing to feed gruel to your melee combat thralls while they level. It adds an impressive 14% to strength every time they level.

How to Craft and Use a Campfire 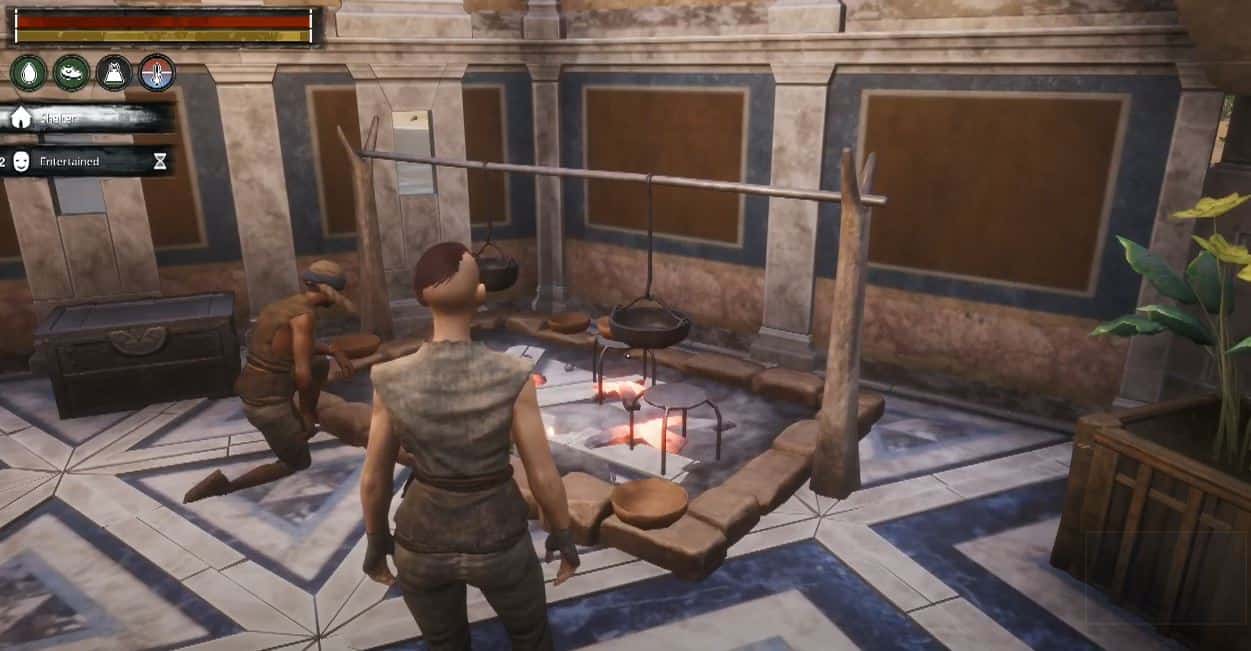 You will need a campfire to make your first bowl of gruel. You’ll only need to reach level 3 to make your first campfire and it is learned under the primitive cook feat. If you’re having trouble with mobs, try running into new areas. Discovering areas is one of the fastest ways to level in Conan Exiles. A campfire requires 5 wood and 10 stone. While the ingredients don’t take much to acquire, keep in mind that a campfire can be spotted from long distances by other players.

Once you’ve crafted the campfire, put it on your action wheel and place it somewhere cozy in the world. To light the campfire, and essentially cook anything on it, you’ll need to put wood or other fuel in its inventory. Once the fuel (and whatever you’re cooking) is in place, press the play button. The helpful timer at the top will let you know how long until your fuel runs out and the crafting items at the bottom show your expected output.

After you reach level 3 and learn the primitive cook feat, you’ll be able to craft gruel on your campfire. You’ll need four items to make your first 10 bowls of gruel: a campfire, campfire fuel (such as wood), 5 plant fiber, and 1 plant seeds. You can find the plants and plant seeds by harvesting any standard bush in any biome. A sickle will harvest more plant fiber and seeds than your hands, and higher-tiered sickles harvest even more.

After your campfire is placed, add your fiber, seeds, and wood to the inventory and press play. The gruel will craft in 10 stacks, perfect for mass production for you or your thralls. Gruel can be made on other cooking stations. Once you’ve crafted a stove you can start cooking enhanced gruel and honeyed gruel. 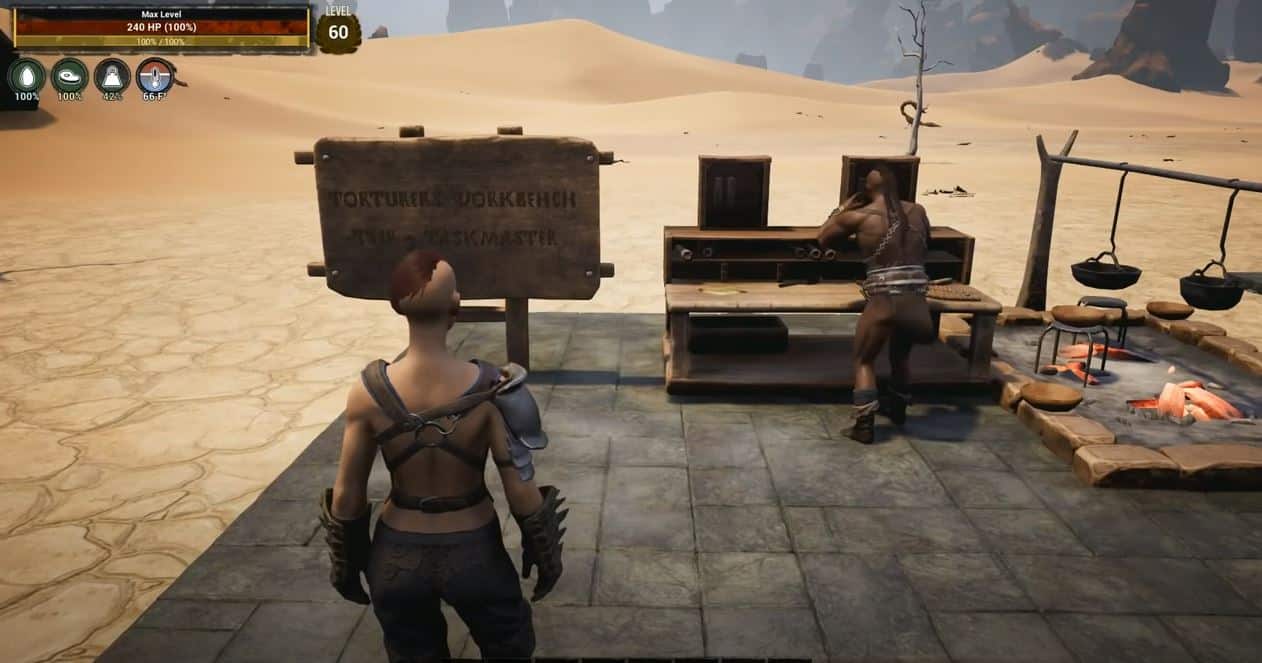 A player can start crafting flavored gruel at any level, but it will take some adventuring to learn the recipe. Some recipes are hidden out in the Exiled Lands for players to find, instead of purchased via the feat tree. To make flavored gruel you’ll need to find the specialist cooking I. This recipe is located near The Summoning Place in H5 and should be easy to snatch once you are level 20 or so.

Once you’ve found the recipe, flavored gruel requires 1 gruel, 1 dried berries, and 2 spice and must be cooked on the stove.

Enhanced gruel is learned from the cooking specialist III recipe, which can be found near Stargrazer’s crest in c11. It will require 1 gruel, 1 egg, 1 spice, and a stove. This recipe is in a pretty high-level area, I wouldn’t try it with anything valuable before level 40.

Honeyed gruel does not require learning a feat or finding a recipe, but does require knowing how to craft enhanced gruel and a beehive. This means you’ll have to have found the cooking specialist III recipe and reached level 33 before you can craft this gruel. You’ll need one enhanced gruel, one honey, and, of course, a stove to make honeyed gruel.

Gruel and the Wheel of Pain

Gruel is by far the best item to stock in your wheel of pain. It has a relatively slow rot timer and is inexpensive to craft mounds of. Thralls don’t care what you feed them while they push the wheel of pain, they will end up with the same stats either way. It’s best to choose the cheapest and most readily available food, and in most cases, that’s gruel.

To use gruel in a lesser wheel of pain all you have to do is put it in its inventory. When you arrive back at the station with a newly bonked and tied exile, they will load into the station and begin consuming the gruel. If they ever stop pushing the wheel but remain visible on it, it means you have run out of gruel. If the wheel stops turning, but they are no longer visible on it, it means your thrall is crafted and ready to be placed in the world or at a crafting station (depending on their type).

When to Feed Gruel to a Combat Thrall 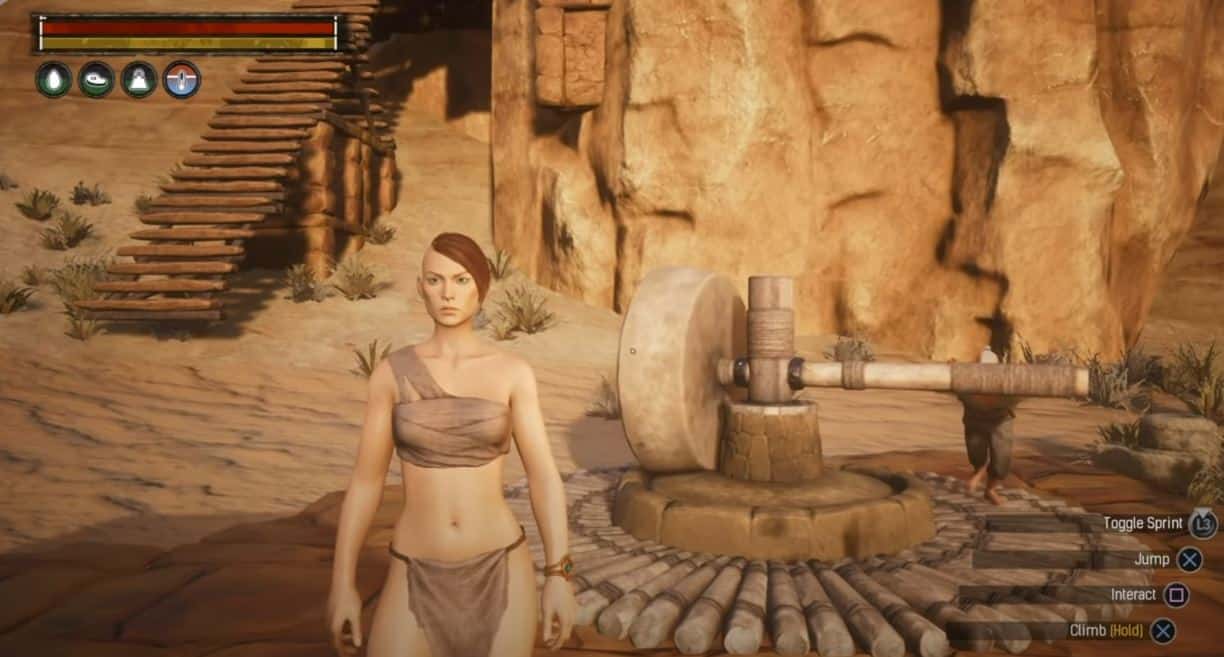 Some thralls enjoy gruel even once they’re off the wheel. Maybe it’s nostalgic or maybe they just always cared for the seed mush. Putting certain foods in your thrall’s inventory while they level increases different stats at different rates. You should feed gruel to thralls that you’d like to become absolute melee monsters. Gruel increases strength gain per level by 14%, the highest possible boost to their strength stat.

Enhance gruel increases strength and accuracy gained by 7% each, making it also a good option for a more well-rounded archer thrall.

Any appropriate food will apply a healing buff by being consumed by the thrall out of their inventory. Once your thrall is max level, the regeneration aspect will be your only concern. Gruel is still a great choice for this as well. It’s certainly not best in class (that’s exotic feast at 10 health/second), but at 6 health/second gruel is certainly the most affordable mid-range health buff for thralls out there. Enhanced gruel provides a 9 health/second buff if you’re willing to take the extra steps.

Gruel is For You and Me and Thralls Mostly 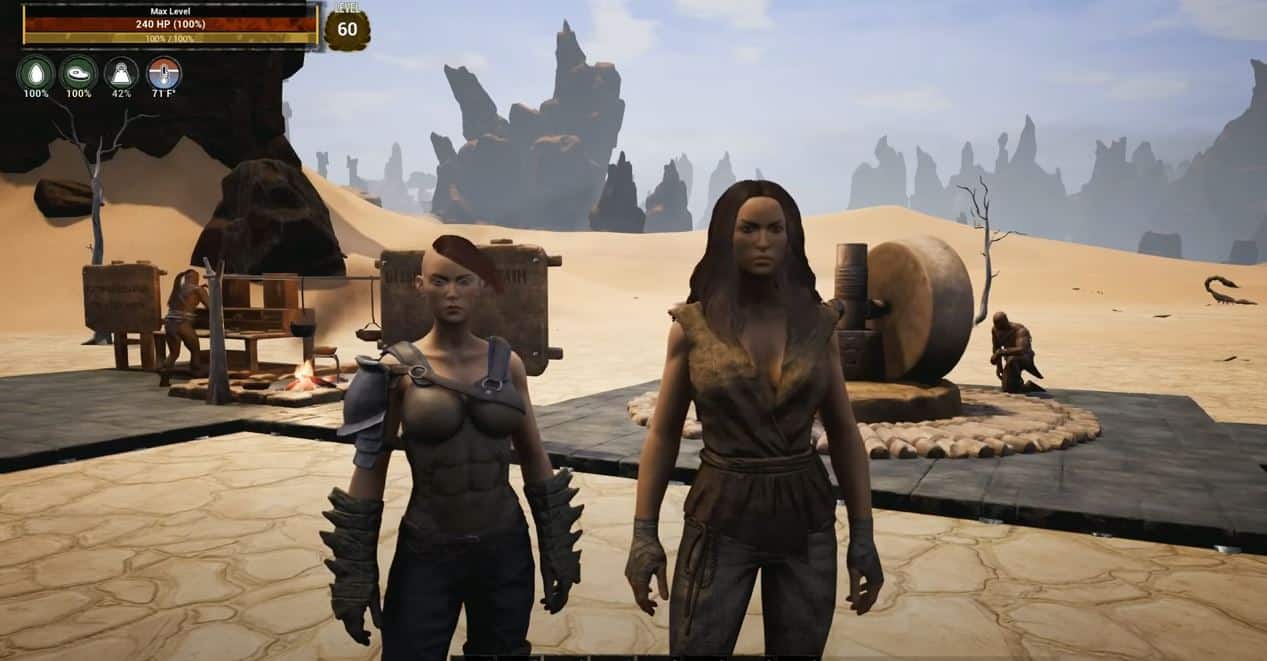 There is no recipe for gruel. No feat to learn or quest to tick off. I’m guessing Funcom doesn’t want it to be too easy. I hope brand new players find this article and take the easy road when it comes to managing their hunger bar for their first couple weeks in the Exiled Lands.

My second and third worlds certainly went a lot more smoothly once I began crafting gruel stacks, and crafting them for the wheel of pain is leagues better than hunting down steak for my thralls in training. I pretty much exclusively feed gruel to my leveling combat thralls and most of them have it in their inventory once they are maxed for a cheap health buff. For such a small item, it wound up being a big time saver and an integral part of my gameplay.

Question: At what level can I start crafting gruel?

Answer: You can craft gruel at any level, but without another player’s campfire: at level 3.

Question: Do I need to learn a recipe to craft gruel?

Answer: No, it is crafted by placing 5 plants and one seeds on the campfire (along with fuel like wood). You will have to learn the primitive cooking feat for the campfire.

Question: What are the upgraded versions of gruel?

Question: What level do I need to be to make better gruel?

Answer: Any, the recipes for flavored gruel and enhanced gruel can be found out in the world. Honeyed gruel will require at least level 33 for the beehive required to make honey. Realistically, though, if you are on your own you’ll need some experience before searching for these recipes.

Question: What’s the number one use for gruel in Conan Exiles?

Answer: Crafting thralls on the wheel of pain. Sure, it may get you through in a pinch, but you’ll likely be eating better food pretty quickly. Thralls don’t care what they eat on the wheel and it is a cheap and easy thing to stack up.

Question: Should I continue feeding gruel to my combat thralls?

Answer: Yes, if they are meant to be melee damage bombs. Gruel increases strength by 14% every time your thrall levels.