Humankind has been addicted to honey since the beginning of our species. Not only does it taste delicious, but the golden treat refuses to rot even in the worst conditions. It was the very first substance we turned into alcohol and mead is still in production today. The magic doesn’t stop there, honey is also used for wounds, illnesses, and allergies. It is so valuable to us that honey fraud, where shippers fold in sub-par sugars, is an international nuisance.

Just as it is in real life, honey is a commodity in Conan Exiles. It can be used not only to cook and brew but also to raise a fearsome bear companion. There is something calming about tending beehives in such a violent game, and I enjoy the chore as much as setting my fish traps or tending my planters. If not for the quiet moments back at base, would we truly appreciate the carnage out in the wilds?

TL:DR: How to Honey, Honey

You’ll need to be level 33 to craft your very own beehive in Conan Exiles. The beehive will produce honey on its own, without bees, but this is a slow way to load up. Using a sickle, harvest bushes and plants around your base to gather worker bees, and if you’re lucky, a queen bee. The hive will “consume” these bees and craft extra honey.

This honey can be used in drinks like honey whiskey with the fermentation barrel or honey-glazed roast with the stove. It can be eaten directly or used to feed a bear cub, for a high (20%) chance of raising a greater bear. Honey can also just be eaten fresh out of the hive. 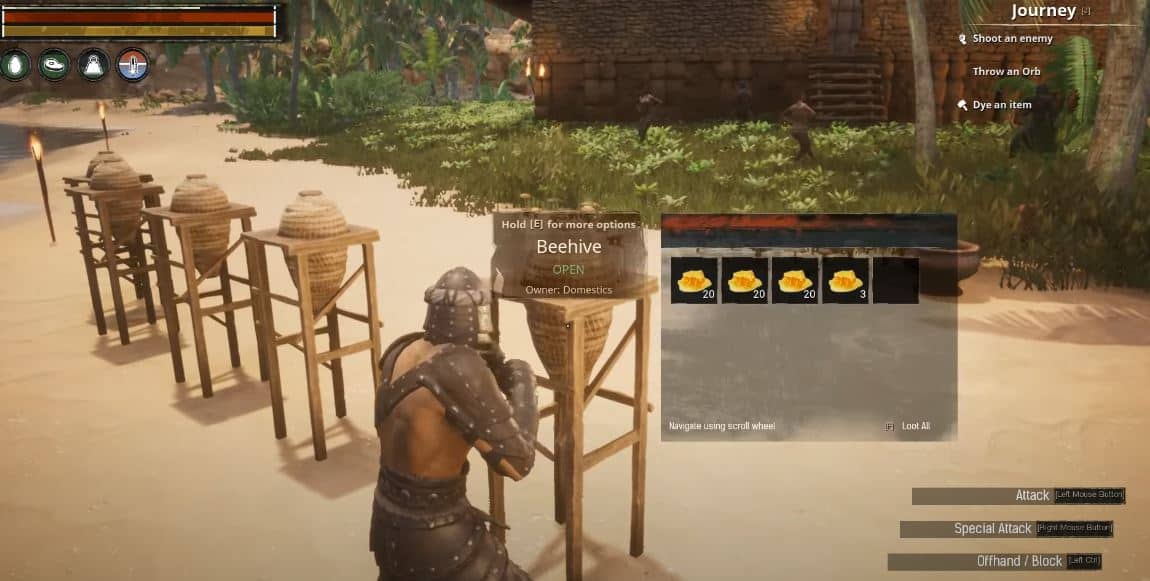 A beehive has low requirements for ingredients, but a decent level requirement. You will have to be level 33 to learn how to make a beehive. You’ll need to learn the apiarist feat under building structures to learn how to make a beehive. Once you have learned the feat, you’ll only need 50 wood and 10 twine per hive. Because they passively generate honey, I recommend placing several so that you can stock up before you need it.

Once your hive is crafted and placed, you may either leave it alone to generate honey or stock it with bees. The hive “consumes” the bees like other crafting stations (the fish trap) and in return generates honey. 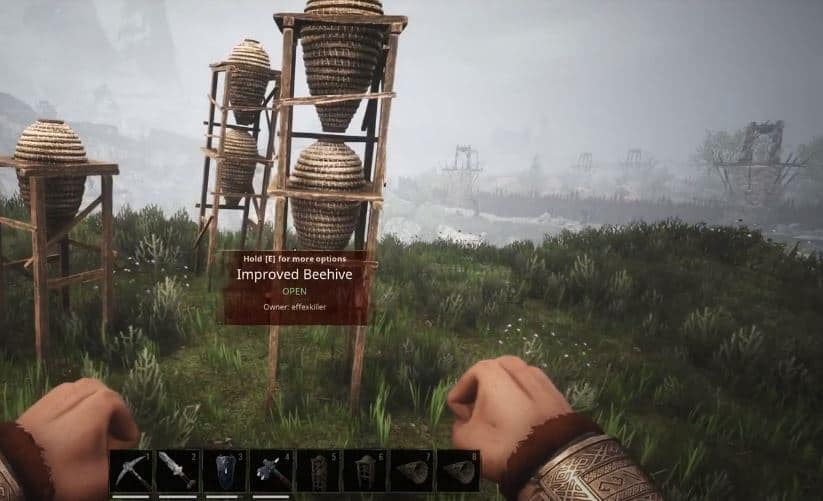 Is it worth it? An improved beehive costs a whopping 150 insulated wood and requires level 53 to learn the master apiarist feat. Not only does this stack take a long time to make, but it’s a two-step process involving a dryer and the carpenter’s bench. You’ll need to make dry wood first on the dryer and then transfer it and resin to the carpenter’s bench to make insulated wood.

The only benefit of an improved hive is more inventory space and a higher rate of passive honey generation. That’s right, as of right now, the improved hive turns bees into honey in the same amount of time and with the same proc percentages as the beehive. It crafts honey passively twice as quickly as a normal hive, but for the price, I’d recommend making two or three or ten normal beehives before I would make an improved hive.  The inventory is definitely twice as large, however, this is also a worthless feature unless you are gone from your base for like… over five full stacks of bees worth of time?

You may have noticed some bees cropping up in your inventory from time to time as you gather plants. Make sure to save them! It’s tempting to throw them in your fish trap, but I’d recommend hanging on to them until you can craft some hives. It’s much more efficient to harvest grubs from your compost pile to use for fish. A bee may net you an exotic fish, but as there is really no use for them anymore, you can save your bees for honey.

A sickle yields the most worker bees or queen bees per swing, though you can still find them harvesting with your hands. The higher level the sickle, the more bees you will collect per proc, though the chances of finding a bee will remain the same. This can be frustrating, as there is no way to speed up actually finding a bee, though higher value plants (like aloe) seem to drop bees more frequently.

You are sure to end up with an inventory full of fiber while on the hunt for a queen bee, so it’s helpful to go looking when you also need some twine. 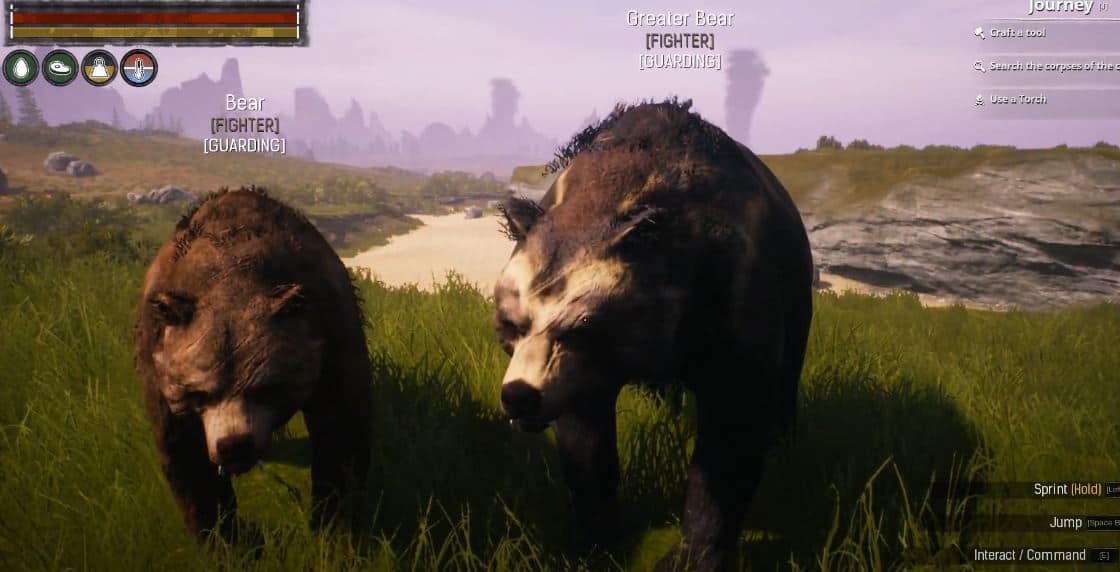 Animal companions in Conan Exiles often come in a couple of variants, with their greater version being the most difficult to get. There’s a good reason for this, their greater variant has wildly better stats than their standard version, and an end-game player only roams with a greater animal companion.

The only thing you can do once you’ve found your cub to ensure that it will be a greater variant, is to use the appropriate food when putting it in the animal pen. The animal consumes only one from the stack and then begins crafting. Each animal has a range of food that increase their chances, but there is only one food per animal that gives the highest chance to craft the greater version. Whatever this item is (in bear’s case it’s honey), the shadespiced version of it grants an even higher percentage.

What Should I Make With All This Honey

While you can eat it straight up, you’re correct to assume making food and drink with it is the most efficient way to use your mountains of golden goop.

You’ll need to craft a fermentation barrel to turn honey into drinks. Mead is the simplest of the drinks to make from honey and will get you drunk and warm you up, which is an invaluable bonus in the frozen north. I’d recommend the higher investment into honey whiskey to guard yourself against the cold in the snow biome, though. Honeyed wine requires the most honey, and has a regeneration bonus along with the drunken/hungover debuff. I carry some for when I run out of aloe potions and wraps.

You can make several different food items on the stove or improved stove with honey. Honey jerky is for those long journeys into the desert where food is scarce, it has a long rot timer and is great for long treks. Honey bread will step up your bread game, sating more hunger than normal bread can. Honeyed eggs, honey glazed jerky, and honeyed gruel are the same concept, just increasing the benefit and longevity of an already edible item. If you’re already making food on the stove, why not add some honey?

Life in the Exiled Lands Just Got a Little Bit Sweeter

A beehive is both a cheap investment and an incredibly helpful addition, relative to most tasks in the Exiled Lands. There’s really no reason not to produce honey at your base. Whether you are trying for a greater bear, brewing mead, or cooking up some honeyed jerky, you’re sure to find some uses for the stuff.

It couldn’t be easier, just craft a hive and sit back and wait. A crafting bench that passively creates items? The way I see it, Funcom is giving bee enthusiasts a little bit of a break in Conan Exiles. It doesn’t happen very often, so savor it!

Question: What crafting station do I need to make honey?

Answer: You’ll need either a beehive or improved beehive to make honey.

Question: Do I need bees to make honey?

Answer: No, not in Conan Exiles. Honey will magically appear in your beehive.

Question: Should I craft an improved beehive?

Answer: No, it’s better to just craft a field of normal hives. Until Funcom changes the beekeeping system they are not worth the cost.

Question: What should I make with my honey?

Answer: You could make honey whiskey to survive the cold, honey bread to eat, or honeyed wine to heal. You’ll need either a fermentation barrel or stove to make these items.

Answer: Bears, of course! Feed a bear cub honey to increase your chances of raising a greater bear.

Question: Where can I find bees to put in my hives?

Answer: They are actually no longer necessary to produce honey, however, you will find bees while harvesting plants. Using a sickle produces more bees.