Eradicati0n
Eradicati0n is a Subject Matter Expert for Conan and an avid Survival Games enthusiast, having put an extremely unhealthy amount of hours into the genre. As a content creator for Conan Exiles, he spends many hours of the day thinking about buildings and characters, but whilst he’s not doing that, you’ll likely find him playing Runescape, listening to music, or watching Netflix. Erad is a big fan of horror, slasher & extreme cinema, Friday the 13th being a big personal favorite. Away from games and shows, Erad also enjoys writing short stories, mainly dark fantasy & Lovecraftian horror, and is constantly counting down days until the next Insomnia Gaming Festival.

Latest posts by Eradicati0n (see all)

There are many important resources in Conan Exiles, and Shaped Wood is right up there with the most useful metals and stones. This resource becomes even more critical as you get closer towards the end-game. It is used in crafting and repairing plenty of high-end weapons and tools, alongside building the ever-important Tier 3 building pieces. Today, I’ll teach you the best way to make Shaped Wood, ensuring that you never run dry.

What is Shaped Wood?

Shaped Wood is a resource that starts to become more prevalent in the mid-game as you acquire better weapons and tools and when you begin to build Tier 2 structures like Stonebrick. Shaped Wood appears in your inventory as a wooden plank and is crafted from regular wood found lying around in the form of branches or harvested from trees using the relevant tools. It has a base weight of 0.13 and can stack up to 1000 units in a single inventory slot, which is excellent, considering the amount of it you will need in the end-game of Conan Exiles.

What is Shaped Wood used for?

It is also used to craft and repair various weapons and tools, though the amount needed for crafting isn’t too bad, and repairing them is even less so. Shaped wood is also used in crafting certain God Altars, an essential tool for PvP raiding, allowing you to harness the power of your chosen god to eliminate your opponents.

How do I make it? 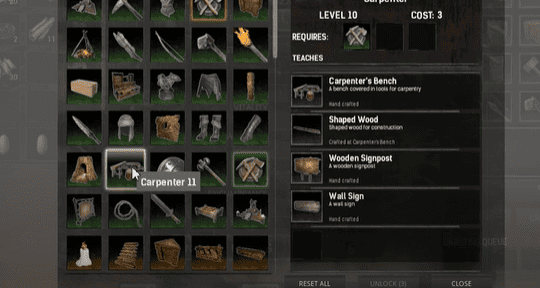 Making Shaped Wood is pretty easy. It doesn’t require any scarce resources or difficult-to-acquire feats; it just requires regular wood, which you can easily acquire from trees. Wood is a resource best harvested with the best Hatchet you have. Hatchets tend to mostly give wood from trees, whereas Picks give mostly Bark, and Pickaxes give a balanced mixture of both. As you get into the game, you may want to use a Pickaxe, as you’ll need the bark to craft mass quantities of tar. However, if you need to mass-produce Shaped Wood quickly, using a hatchet will yield the most significant amount of raw Wood.

Crafting Shaped Wood isn’t too hard; it’s mostly the quantity and time investment that creates a bottleneck in Shaped Wood production. It is by far one of the more accessible Tier 3 building resources to mass-produce, though it doesn’t take as much time or require as much effort as Steel Reinforcements, for example. You’ll need to acquire the Carpenter feat to craft Shaped Wood, unlocked at Level 10 and costing 2 feat points.

This feat gives access to Shaped Wood crafting and the Carpenter’s Bench, the latter of which is always required to craft Shaped Wood. Different levels of Carpenter’s Benches give different production ratios, though, so some are better to use than others. Let’s take a look at which is best for you.

As you can see by the summary above, there are a few different options for which bench you should be crafting Shaped Wood at. Firstly, the regular Carpenter’s Bench is your only choice for crafting Shaped Wood in the early game, and you’ll have to craft it at some point to be able to craft any of the other stations. The next upgrade you’ll want to take is to move from the regular bench to the Improved Carpenter’s Bench, which requires your character to be Level 30, and you’ll also have to purchase the Master Carpenter feat using 6 Feat Points.

This bench gives you a slightly better Shaped Wood crafting ratio, saving you three pieces of regular wood per Shaped Wood crafted. It also allows for slightly faster crafting, allowing for an extra 3 Shaped Wood to be crafted per minute. Not a massive upgrade by any means, but it’s a welcome bump in production that will help you with meeting the costs of crafting as they begin to increase.

This bench is the ideal choice if you need a lot of Shaped Wood crafted as fast as possible, and you can meet the production cost. If you needed to prepare 1000 Shaped Wood using this bench, it would take roughly 55 minutes, and it would cost you 10,000 Wood, quite a hefty cost, but produced at a relatively speedy rate compared to any of the other benches. Looking at resource requirements that high, you may want to throw up a quick outpost somewhere out in the world to comfortably collect tons of wood, preferably in a spot abundant with trees.

If you needed to craft 1000 Shaped Wood using this bench, it would only cost 5,000 Wood; however, it would take roughly 166 minutes, around 2 hours and 45 minutes. That is a massive increase in the time it takes to craft compared to the Trade Carpenter’s Bench, but you can also squeeze way more Shaped Wood out of any resources you’ve collected.

There is no clear-cut correct choice here between the two Level 57 benches. However, that being said, my personal choice would be the Trade Carpenter’s Bench. Whilst it may require more resources to run, and thus more time would have to be spent gathering resources, I don’t think the resource reduction provided by the Precision Carpenter’s Bench is worth it. Whilst you have to collect twice as much Wood as you would have to if you used the Precision bench, the much faster crafting time is a massive boon to your productivity and allows you to be more proactive in your crafting and combat endeavors.

Crafting the Shaped Woodcraft that much faster will help you build your base much quicker and ensure that you have plenty of Shaped Wood to repair your workstations, tools, buildings, and weapons. Just because that’s my choice, though, doesn’t mean it will be right for you.

Depending on your circumstances, you may wish to choose the Precision Carpenter’s Bench instead to ensure that you don’t have to gather too many resources. You can instead spend longer time between crafts by raiding dungeons, capturing thralls, exploring the landscapes, or taking down World Bosses for their sweet, sweet loot.

Question: Should I start producing large quantities of Shaped Wood early in the game to prepare for the end game, or should I wait until the need arises?

Answer: This is a pretty good question. Whilst planning for the future is always good, especially if you have large plans for the future, I don’t think producing massive quantities of Shaped Wood is a great idea. As end-game resources go, Shaped Wood is one of the more easily acquired, and thus I would recommend waiting until you need it to start crafting large amounts of it.

By all means, produce a few hundred just so you can sit comfortably, but dedicating time and resources to produce thousands of them will take more time than it’s worth, and it’ll also make any future base migrations a hassle. Furthermore, if you’re playing PvP and you get raided, all that lost Shaped Wood will sprinkle even more salt in the wound.

Question: Is it possible to farm Shaped Wood from NPCs rather than spend time crafting it?

Answer: Yes, it is possible to kill many enemies and acquire Shaped Wood. However, this isn’t something I’d recommend. Whilst you’ll undoubtedly find yourself slaying hundreds, if not thousands, of enemies throughout your time in Conan Exiles, they drop Shaped Wood in such low quantities that it honestly isn’t worth it as an alternative means of production.

It’ll take far more time, effort, and resources to kill enough enemies to get 1000 Shaped Wood than it would do to craft it up in the traditional way. It can be very tempting to look for alternative methods for acquiring resources like these, but with Shaped Wood, your best bet is to bite the proverbial bullet and do the hard work to craft it.

Question: I’m a solo player, and I want to build myself an excellent Tier 3 base. How much Shaped Wood would I need?

Answer: Without knowing your exact base plan, layout, and structure, it’s impossible to say. However, you can get a rough idea by looking at specific items’ costs and thinking logically. Just a single Tier 3 wall, let’s say Aquilonian, for example, costs 2 shaped wood. Walls are the core building piece of any base, and even for a smaller design, you’d probably need at least 50 walls.

That alone is 100 Shaped Wood right there. Then you’ve also got doors, fences, ceilings, roof pieces, all of the crafting stations you’ll be placing inside that base, and the weapons and tools you’ll be arming yourself with. You have to carefully plan your steps to accurately count how much Shaped Wood you need. I’d advise just going with the flow and meeting your Shaped Wood needs as you encounter them, ensuring you always have an extra couple of hundred Shaped Wood lying around that you can use at a moment’s notice.

Shaped Wood, unlike Hardened Brick, Alchemical Base, or Steel Reinforcements, is one of the easier end-game resources to craft. The Wood required to prepare it is abundant across the map, and the real bottleneck for mass-producing Shaped Wood is your Carpenter’s Bench of choice and your ability to gather enough resources to meet the cost. Hopefully, this guide has given you all the information you need about what Shaped Wood is used for, how to craft it, and which bench you should use.

Unfortunately, the choice between the Precision Carpenter’s Bench and the Trade Carpenter’s Bench is a personal one that depends very much upon your play style, how many people are in your clan, and your ability to collect the resources required. However, regardless of what you choose, you should now know everything you need to know about Shaped Wood. Time to get crafting Exiles; best of luck with your Shaped Wood endeavors!