It’s a harsh, unforgiving world in Conan Exiles. Between the undead, the hungry beasts, and the hostile humans you’ll encounter, it can be enough to drive anyone mad. Taking a break from the carnage to do some customizing can be a great way to catch your breath, and dyes are a crucial part of doing exactly that.

Whether it’s making your armor more fearsome, helping you identify friend from foe in combat, or maybe you’ve got that one special thrall with nothing but strength and vitality perks, and even though you tell your thralls you love them all equally, maybe you love that one a bit more equally than the others and want him to stand out, dyes will help you do so.

Dyes are used to adding coloring to your clothes and craft warpaints, giving you customization and utility. Crafting dyes requires glass flasks, which can either be crafted or purchased, which then need to be filled with water and combined with a given ingredient to create the desired color. Once the dye is crafted, you can apply it to your gear by selecting it and pressing the dye button, which will give you a variable amount of options for applying and reapplying colors, depending on the piece of gear you have.

How to Craft Dyes

Before you can begin crafting dyes and going on a painting spree, you’ll need to make sure you have the right benches. Dyes are crafted in a dyer’s bench, unlocked via the Dyemaker feat after reaching level 25. The bench itself is thankfully relatively cheap, requiring only 50 bricks and 50 tar, which are both easily obtainable in the early game by smelting stone and processing hides in a tanner’s bench.

Once you have the bench complete, you’ll need to get your hands on some glass flasks. There are a few ways to obtain them in bulk. The first way is to craft them directly. 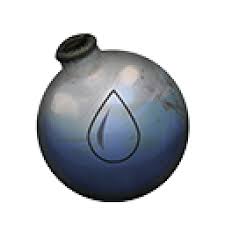 Glass flasks are crafted in the casting table, unlocked by the Firebowl Cauldron feat after hitting level 15. You’ll need to craft a glass flask mold which will require a small amount of iron, but you’ll only need one. Once you have it, you can use it infinitely to craft glass flasks, provided you obtain glass.

Glass can be crafted by smelting crystals inside a furnace of your choosing at a rate of two crystals to one glass. While not the focus of this guide, farming crystals in bulk is something you’ll likely find yourself doing, especially if you’re interested in PVP, as it’s a crucial component for explosives, so being able to obtain crystals in great quantities is crucial to your success.

If you’re on Siptah, crystals can be found at the center of the map and around nearly every vault. They’ll look like shiny black pebbles on the ground and can be incredibly difficult to hit. Going into first-person view and crouching while swinging can help, and there are larger crystals located around the refuge of the gremlins, the refuge of the goblinoids, and in a small patch on the cliffs at L10 that are easier to hit.

In the original map, crystals are found within caves, the finest of which is the Scuttler’s Shortcut at F7. Other crystal-bearing caves include The Passage at K9, Hanuman’s Grotto at H3, The Cavern of Fiends at F4, and The Warren of Degenerates at F6.

Nearly all of those locations should give you plenty of crystal for your flasks, especially if you’re using them for dyeing. Crafting the flasks is considered by most to be the worst way to obtain them; however, there is a much simpler way to obtain them in bulk, provided you have the coin, of course.

If you’re not a fan of watching your valuable crystal be melted down into wasteful single-use orbs, there is a better way. There exists a merchant on both maps that will sell glass flasks to you for silver coins. Vennor Skinflint at Sepermeru in B7 and a merchant at The Camp of the Castaways at I13 in Siptah will both exchange ten glass flasks for a single silver coin, which, if you’ve got any silver at all, means you can be buying vaults full of flasks for very little effort.

The coins themselves can be looted from chests nearly all over the map or crafted at home at the casting bench with the use of a coin mold. Obtaining silver for the coins is easy since both maps have great sources of silver that are easily accessible.

In the Exiled Lands, head to the scorpion’s lair at C6 to find an immense amount of silver both inside and outside the instance. Alternatively, the Descent of Dagon at M6 has a few silver nodes on its lowest level near the water.

In Siptah, sporadic silver nodes can be found outside nearly every vault.

Once you have the silver ore, simply smelt it in a furnace to produce silver bars, then use the silver bars on the casting bench to craft the coins. After even a single trip for silver, you’ll be able to buy enough flasks to last you your entire playthrough, even if you wind up repainting your army a thousand times.

Once you have the glass flasks, you need to fill them with water, and there are a few ways to accomplish this. The most straightforward way is to just fill them by hand. Use an empty flask on any water source, and it will fill with water, though you’ll quickly find this method will take you a small eternity.

You can place empty flasks into a bonfire alongside some ice to fill them without having to do it manually, which will give you a use for your spare ice and can be an easy AFK solution if you don’t have an alchemist.

If you do have an alchemist, however, the process becomes much easier. Simply place the flasks into an alchemist’s bench alongside an alchemist, and you can craft them into water-filled flasks at no cost. This does not require a high-tier alchemist; any tier will do. Just don’t ask them where the water comes from.

After obtaining your ingredients, the final craft is as easy as combining your water-filled flask with the required component to make the dye you want. The trouble is obtaining that extra component, which will be different for every dye. This extra component can be anything from brimstone to orange phykos, so be sure to stock up on the various flowers you see while you’re out exploring; you’ll never know which ones you may need.

It’s worth noting as well that black and white dyes both require a tier 4 alchemist to craft, so not all dyes can be crafted just from unlocking the feat.

Keep in mind that if you don’t like the dyes you’ve applied to your gear, you can remove them for free by selecting the option to return it to its original color on the dyeing page, so don’t worry about potentially ruining your new gear piece. Experiment away and find what works for you!

Dyes have a few secondary uses that give them immense utility outside of just customization. I mentioned earlier that color coding your team can help prevent friendly fire in PVP, but beyond that, dyes can be used to craft warpaints. Warpaints can be purely cosmetic, with many being unlocked through various means in the wild, but they can also grant you certain buffs to your stats when applied.

Keep in mind that functional warpaints will only last one hour after being applied, so if you’re planning on being away from home for a while, take the time to stash a few extra warpaints in your pocket just in case. Decorative warpaints that give no buffs will last for 4 hours instead, and all warpaints will expire upon death, so be careful when exploring.

Warpaints are crafted in the same bench as your dyes, the dyer’s bench, which should make keeping your ingredients organized a bit easier. Decorative warpaints will only require three ingredients, a papyrus scroll, the required dye, and an inking brush. Utility warpaints have the additional requirement of adding two dragon powders into the mix.

The papyrus scroll is crafted at the artisan bench, and it only requires plant fiber to do so. The inking brush is crafted at the dyer’s bench by combining fur, branches, and plant fiber. Fur is easily obtained from most creatures that have fur, such as bears, goats, gorillas, and so on, so killing the wildlife around your home should supply you with plenty.

Once crafted, simply use the warpaint to apply it. If you don’t like the war paint you’ve applied or want to switch it, you can, of course, wait out the timer, or if you’re really in a pinch, you could respawn.

Alternatively, you can craft sloughing liquid by combining a water-filled glass flask and glowing essence at a dyer’s bench and use it on yourself to remove the warpaint immediately.

Question: If I’m trying to stand out in a PVP setting, what are the best dyes to use?

Answer: Using brightly colored dyes will make it easier to identify your allies in combat. Dyes described as “full,” such as full blue and full yellow, will be much brighter and easier to see. Make sure your allies and thralls are similarly colored, so there isn’t any confusion.

Question: If functional war paints only last an hour, is it worthwhile for smaller groups to farm them at all?

Answer: It depends more on your gear. Without explaining all of the intricacies of PVP builds, which would frankly need its own guide, you’re typically looking to hit certain attribute perks with your build. If you have well-made gear equipped that is crafted by a high-tier armorer thrall, it may be possible to get the stats you need with just the clothes you have and a spread of buffs.

War paints can give you the extra few points you need, but they’re by no means necessary for combat. So, if you’re having trouble paying for the dragon powder necessary to maintain your war paints, feel free to leave them out of your builds and save yourself the time.

Question: I don’t like the decorative warpaints I have unlocked. Is there any more I can find?

Answer: Yes, nearly every DLC will come with decorative warpaints. If you’re not looking to spend money, some warpaints can be unlocked as rare drops from the summoning pools in the Isle of Siptah.

The Final Wrap Up

Dyes are an essential part of your customization. The right combination of dyes and warpaints can separate the experienced and fierce barbarian from the humble freshly spawned naked and can help you feel your best when you’re out cracking skulls in half. It’s okay to just be fierce, but some of us want to look fierce too, and there’s nothing wrong with that. And if anyone says there is, well, it’s Conan Exiles after all; what’s one more skull for the pile?