Similar to most survival games, Conan Exiles can often be little more than an inventory management simulator. Players tend to want to bring everything they run into the home, even the easy-to-find stuff.

Once you start camp clearing and dungeon diving, you’ll start having to make some hard choices when it comes to what to keep and what to toss.

There are a couple of core items in the game that you’ll notice you only run out of when you need them, and it’s very likely you peeled off a stack and left it in the desert to make room for something else in the not-too-distant past.

That’s why the best practice is to collect safer items with an empty inventory (not stacked full of arrows and potions) and lightweight armor. Fill a couple of chests with them and forget about it.

Bark is one of these items. The stacks are heavy, but it’s easy to find. Instead of collecting as you go, it’s better to have a couple of good farming spots near your base to load up on the stuff. Grab your pick and companion with the most inventory spots for one large bark run!

Bark can be harvested from trees by using a pick or a pickaxe. A pick harvests the most bark of any tool and the higher tier your pick, the more bark you will collect per tree.

Bark is found most often in the bleached, leafless trees in the desert and mounds of the dead. A glorious grove of dead trees spans the length between Swagger Rock and the Black Galleon in H4.

Bark can be used as fuel anywhere but is most efficient as fuel in the tannery or the drying rack. The tannery turns hides into leather for armor and other goods.

The dryer can sry out food for storage, or make dried wood which is used to create insulated wood. Insulated wood is used often in T3 and T4 equipment and buildings.

Bark also produces tar in the tannery which is combined with brimstone to make steelfire. Steelfire is used to turn iron ore into steel.

Where to Find the Most Bark 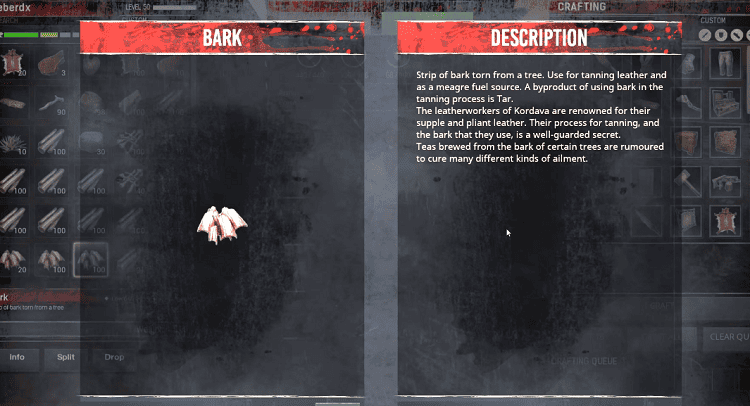 When you find patches of them scattered around the desert area or even the mounds of the dead, you’ll know it’s time to get out your pickaxe. Try looking in H7 between Swagger Rock and the Black Galleon for a massive span of dead trees.

A general rule of thumb is that trees in higher-level areas yield more bark. This is not necessarily helpful information unless you apply it to an area with a high density of trees. For this reason, the highlands is a great place to farm bark.

The trees will yield more than the southern half of the map, and the forests are dense with tightly packed trees.

How to Harvest the Most Bark

Next, consider applying a tool upgrade kit to your favorite pick or pickaxe. Similar to the tier of your pick, the tool upgrade kit increases the number of resources harvested per swing for the tool it is applied to.

The last thing you can do to harvest more bark, or just resources in general, is to dump 20 points into your survival stat to get the Hard Worker perk.

Unlike the quality of your pick or a tool upgrade kit, which determines how much bark is gathered, the Hard Worker Perk instead decreases the amount of time it takes to gather a node. You will be collecting the same amount of bark per node, just in a lot less time with this survival perk.

The Difference Between a Pick and a Pickaxe 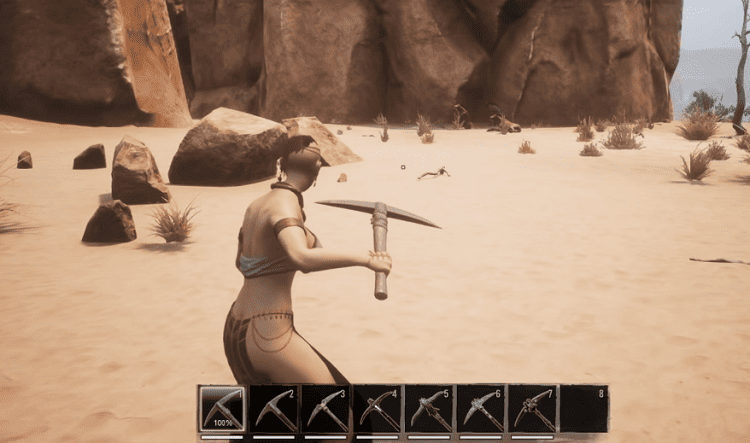 Conan Exiles varies slightly from other survival games concerning their tool system. The first collection tools available to you will be a pick and a hatchet (or axe). A hatchet collects mostly wood from trees and a pick collects mostly bark. You’ll also use your pick for collecting ore and rock and collecting specific items from corpses.

When you make it to steel tools, the pickaxe will become available to learn and craft. The pickaxe is a hybrid between the hatchet and the pick, as in it can perform tasks that either tool is required for.

So is there a benefit to using the same tier pick over a pickaxe? Not when it comes to item collection. A pickaxe will harvest just as much bark as a pick when used on the same tree. In addition, it will also be harvesting just as much wood as if you had used a hatchet.

However, players will still craft a steel pick for bark collection, for instances where they only want to fill their inventories with bark and skip the wood.

At level 57 you’ll have the opportunity to learn a recipe to create your own bark. When you purchase the master carpenter feat, it will come with a recipe called shave bark that can turn 10 wood into one bark at the carpenter’s bench.

If you have a T4 carpenter on the bench, it will only take 5 wood to make one bark. This is not the most economical way to acquire bark, but it works well if you accidentally run out at your base.

How to Use Bark in Conan Exiles

Bark can be used as fuel on campfires and in ovens, but it really shouldn’t be. There are much more efficient fuels for these workbenches, such as wood, coal, and oil. It’s best to use bark as fuel at a tannery or on a drying rack.

A tannery is for turning hide into leather. If you’re tired of wearing plants, try using a skinning knife on the shalebacks and crocodiles around your camp to collect some hide.

You can turn the hide straight into light armor, or place it in your new tannery’s inventory along with the bark you’ve harvested with your pickaxe. The hide will start crafting into leather, which can be used at an armorer’s bench to make yourself some medium armor.

You will also need iron bars to create this armor, so keep your eyes open for iron ore while you’re out farming bark and hide.

In addition, use bark at a drying rack to dry out wood or meat. Dried food will last longer in your inventory before rotting and dry wood is used to create insulated wood at the carpenter’s bench.

You’ll need insulated wood for many recipes, but predominantly for gear and buildings that are steel quality or higher. Putting any extra wood or sticks and bark into your dryer even before you need massive quantities of dried wood is good practice.

What in Tar-Nation: Everything is on Fire

When used to fuel a tannery, bark will produce tar. You’ll find tar useful for many combat and base raiding operations. These applications include setting your enemies on fire, setting them on fire a different way, and finally, setting everything on fire including your enemies. Whatever tar recipe you choose, someone is going to end up on fire.

More importantly, save all your tar for steel production. Tar is combined with brimstone to make steelfire, which is required for steel bars. It may be hard to think about it now, but you will end up needing quite a bit of tar when it is time to upgrade all of your gear (not to mention the rest of your base) to steel.

My Dogs are Barking 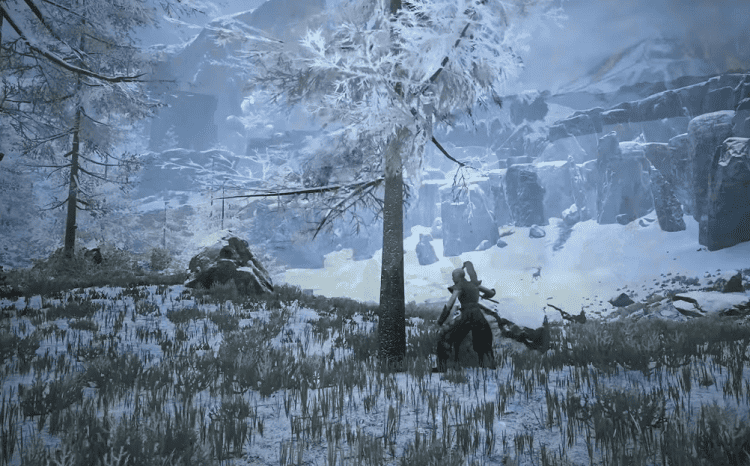 It may take some running before you fill up a whole pack with bark, but it is the most time-efficient way to gather the resource.

If the stretch of dead trees in H4 between Swagger Rock and the Black Galleon isn’t accessible to you yet, swinging your pick at any tree will do. If you’re tired of only getting a couple of bark per swing, the easiest way to fix that is to upgrade your pick.

Bark is always the core item to run out first at my base in the early levels. Something about swinging a pick at trees seems tedious. Once a pickaxe is available to me, things get quite a bit easier.

The bark will end up in my inventory whether I meant to harvest it or not, and then eventually in my tannery making leather and tar. That’s really for the best because crafting explosives with tar and then using them for chaos is one of my favorite activities. Any location in the Exiled Lands could be improved with a little fire.

Question: How do You Get Bark in Conan?

Answer: Hit any tree with a pick. Dead trees have the most bark and higher levels areas have more bark per tree.

Question: Can You Make Bark in Conan Exiles?

Answer: Yes, but you’ll need to be at least level 57. Learn the master carpenter feat for a shave bark recipe that turns 10 wood into one bark.

Question: What Tool is Used to Farm Bark in Conan Exiles?

Answer: Use a pick or pickaxe on trees to farm bark. If you only want bark used the pick, the pickaxe will harvest both bark and wood.

Question: What is Bark Used for in Conan Exiles?

Question: How do I Get Tar in Conan Exiles?

Answer: Tar is produced in the tannery by fueling it with bark.

Question: What is Tar Used for in Conan Exiles?